Where are activists on Muslim women rights? 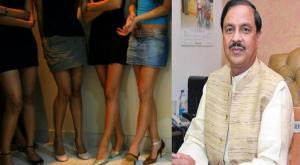 “Rather than have them killed at home, it’s better that they are given divorce.”

“Men are more intelligent, they know how to control their emotions. They don’t decide in a jiffy, that’s why they could make a fair decision on how far to go with the calls for “ Tein Talaaq.”

“Rather than be in an illicit relationship, it’s better that men are allowed to keep a second wife at home.”

In a common course of action, we see organizations/institutions/politicians/posterboys/individual feminists falling over each other to take up the women’s cause. Hard as I try, I can’t find them anywhere now. Come on, where’ve you been hiding folks. The women of this country are looking up to you.

Only  a few dozen hours before, Tourism and Culture Minister Mahesh Sharma had made that statement on “skirt” which caused a tsunami of revulsion in our public discourse. The poor minister kept reminding that he has only offered a viewpoint and there is no law being enacted and enforced. But the “freedom for women” brigade was already beside themselves in anger. The discussion even veered to the extent that why men are allowed to go in temples in bare torso while women are asked to drape themselves, from head to toe, in sarees. The common refrain was, that it’s women who would set the limit for women’s freedom—not men.

Then there is this case of Shani Shignapur Temple. Again there was a huge uproar on the matter of women’s entry into the temple. The matter went to the court. The Temple Trust kept sticking to their “no-entry” stand. But later it bowed down to the court’s order. The rights for women made a significant gain.

In the matter of women’s entry into Haji Ali, again a terrible din was created. Tripti Desai, who had promised to take the help of a chopper to enter Shaani Shignapur, did manage to enter Haaji Ali but only till to the point where all women are permitted. The courts did order the doors to be opened but the matter has now gone for a fresh appeal against.

However, interestingly, no well-known women activist opened a front on the matter of entry into Haji Ali. No women’s organization hit the streets. No women campaigner launched a campaign in social media.

There was also this movement to tie sanitary pads on the trees inside University campus. Girls will marry or not; will have pre-marital sex or not; whether they be bisexuals or hetrosexuals—“My Choice” campaign for women’s freedom was hoisted on shoulders by these feminist activists. And why not, women’s freedom will be decided by women and not by men, right!

So are we to believe that taking up the cause of women and individual freedom is just a tool for people/media/organizations who have their own agenda to pursue. All those statements, “Addas” amount to nothing but only personal advancement.

So, to use a sexist expression, the slip is showing.