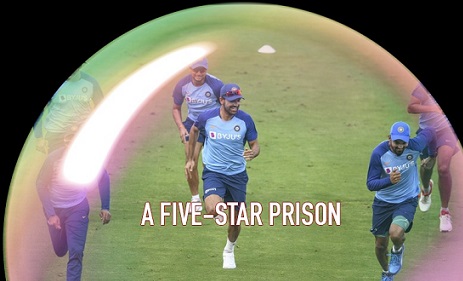 Indian cricket players went into the bio-secure bubble around mid-August to get ready for the 13th edition of the Indian Premier League played in United Arab Emirates.

Made necessary by the global Covid19 pandemic, the move has indeed helped the world of cricket slowly but surely limp back to some kind of action which looked well nigh impossible not very long ago.

Team India is in Australia till well into January 2021, while England is visiting South Africa and Pakistan and the West Indies are touring New Zealand.

No sooner are Indian players back home from Down Under that they need to welcome England for a near-full series – 4 Tests, 3 one-day internationals and 5 Twenty20 internationals. As per the announcement by the Board of Control for Cricket in India president Sourav Ganguly, the itinerary was tweaked by mutual consent to replace a Test match with two extra T20s to prepare for the ICC T20 World Cup scheduled later in 2021.

It is more than obvious that no cricket playing nation wants to miss out on the action. So much so that Pakistan players have stayed put in New Zealand despite more than one breach on quarantine norms and nearly 10 players testing positive for the virus. A stern warning from the hosts and reading the riot act by the visiting team management is hoped to bring things under control by the time it’s their turn to face the Kiwis.

But one thing cannot be emphasized enough!

Life inside a bio-secure bubble is tough, to put it mildly. Lack of one-on-one interaction makes people start getting edgy and no amount of phone calls, both audio and video, can replace the feeling of the simple human touch. It’s something humans crave for and, though players are together as a team, nerves do begin to fray and sparks can fly at the flimsiest of reasons.

It needs an extremely mature handling on the part of all concerned … players, support staff, administrators.

But it’s not an ideal situation. Look at Indian team: A few players had confided on chat that the squad would need a psychologist given you are only seeing each other for months at end. There were also fears on playing in front of empty stands which thankfully has turned out to be a false alarm.

So perhaps less bad for Virat Kohli who is returning after the first Test or men in coloured clothing who haven’t been picked for the Tests. But those who would be required to stay put till the end—our Bumrahs and Shamis etc—it would be some feat if they return uninjured in mind or body.

Cricket is one of the few sports that has seen near full-scale international resumption. Others have stayed cold but for occasional sputter in soccer and Formula One. Rest are looking at Tokyo Games in July as the next big ticket event though funnily, several sports such as boxing, wrestling and track and field are some distance from finalizing their qualification processes.

The bio-bubble can, at the very best, be a short-term solution. The isolation begins to take a toll beyond a point and obviously performance takes a severe beating.