All bearded and brown, what it’s like travelling to US on 9/11 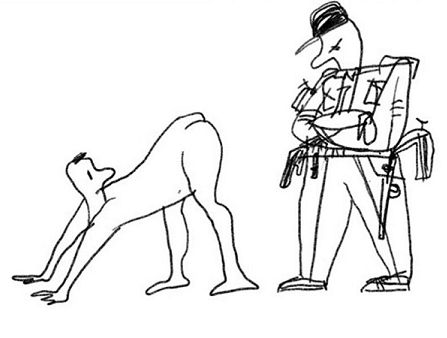 For years after the original 11th September incident happened, I made sure I flew from India to the US on the 11th of September, for no other reason but to see how it was being treated en route at the one-stop locations. London, Moscow, Zurich, Seoul, Hong Kong and Dubai are some of the way-points I went through. Why? I just like to fly different airlines. Especially Aeroflot. For the first few years, flights were light on this date, that I recall.

Frankly, it appeared to me as though the rest of the world had moved on, but landing in the US as bearded and brown was always something else again. After a few years of this, I gave up, it was just not worth the angst and by then my surname was also attracting attention, so any flight in or out of the US got me my SSSS notification on the boarding pass. What it actually means is that you can also be taken to a private room, made to strip, and have all your orifices inspected as well as recorded for posterity, especially posterior.

By 2007, I stopped renting self-driven rental cars, and believe me, you are stuck without that option in many parts of the US, but I bravely tried trains and taxis, to the amusement of my friends there, and by 2009 I gave up flying to the US too. Travelling to, within and from the US became just too much like the experience of travelling to and from Communist countries in the ’70s and ’80s.

One time at SFO (San Francisco Airport), the friend who dropped me, was selected for a rigorous inspection as well as review of his complete life-history not just on the departure ramp at the airport but later on when he reached home too. It seems they took grave objection to the fact that he was, also, a good photographer. Doing wedding features, amongst other things.

To anybody in the tech industry, or anybody with a worldview, in both cases with awareness of the way money and oil flows together, it was clear as daylight that the real bad guys came from the Land of the Deserts and not from the Lands of the Rivers or the Mountains, but by then the Flow of the Poppy from the Golden Triangle and the Golden Crescent had become the world’s single largest economy. What was about 50 dollars a kilo in the rugged mountains and forests, you could call all of the movements “Silk Routes” to keep the facade on, changed itself to 5000 dollars a gram by the time it hit the streets of the then most powerful country in the world.

So, it was time to declare these two ancient civilisations, cradles of humanity for 1000s of years, as propagators of weapons of mass destruction. And bomb them back to, truth be told, Biblical Times. The revenge from the Caput Mundi Eternal City via the Big Building with the 5-sided symbol on the Potomac was considered complete. The world was now, apparently, headed towards more peace and free trade via gunboat diplomacy. Or so it was hoped.

China happened. The US Navy woke up to realise that it just didn’t have really good repair facilities anymore. Plus their laundry in Hong Kong changed owners.

Iran happened. Over the East Med, air superiority was with the others, while the Israelis went and made best friends with the Arab World.

India happened. Suddenly, Diego Garcia was not the only super-power in the Indian Ocean, and we are not supposed to talk about the Andamans and Lakshadweep.

Russia happened. If you follow the true beneficiary ownerships of the money management business, you realise who is now behind the despondent owners in Delaware.

Across the world, the Umrikan influence started waning, as others joined and in some cases went ahead in the competition for dominance. Preventive defence applied to external defence meant and means much more than just main in uniform with gun wearing boots. Increasingly now it means woman WFH and knowledge of numbers behind a monitor too. Nobody knows how to squeeze life out of the last cent or paise than a woman.

In the midst of all this, something else happened in Umrika, which is not making the mainstream media. But first – a little background.

On the 11th of September 2020, I received a phone call from a very good friend, we go back to school days, grew up in the same part of Delhi, joined the Merchant Navy together and connected well. What he wanted was simple – he wanted to reach India this winter, with wife, to spend the next 6 months or so “somewhere safe”. What’s wrong with Umrika, I asked him?

Just do a search online for “guns ammo shortage USA” or similar, and see what comes up, and you now know that the legacy of the 11th of September is not an explosion. It’s an implosion. From within.