And here are these who won’t play Holi this year 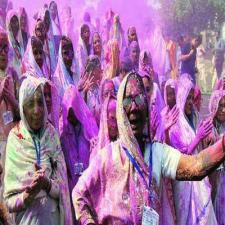 Holi unites India with colours but this year it’s true with even those who choose to forsake it in the solemn memory of Pulwama victims.

It’s perhaps in fitness of things that Central Reserve Police Force (CRPF) has pulled out from any celebrations given the dastardly killing of 40 CRPF jawans by a suicide bomber in Pulwama on February 14.

But that most political parties in Bihar, cutting across party lines, too have chosen to step aside as a mark of respect for the slain soldiers is a welcome gesture. Manoj Kumar Jha, the national spokesperson of RJD has already made an official statement about not celebrating Holi this year. BJP’s state vice-president Devesh Kumar also declared that his party would abstain this year to show solidarity with the martyred jawans. JD(U) also has made a similar resolve. The state unit of Congress, even as  its central leadership wants proof of India’s retaliatory strike in Balakot, is also following in the footsteps of their regional political fraternity.

The widows of Vrindavan, associated with the legend of Lord Krishna and Gopikas, and Radha, would also not mark Holi this year as a festival of joy and colours. Their stated reason is to mourn the recent death of BJP leader Manohar Parrikar who as Defence Minister had given a green signal to Surgical Strike 1.0 following the terror strikes in Uri in 2016. The surgical strike 2.0, as known, is the Balakot strike which happened in the wake of Pulwama attack.

Scores of wailing widows gathered at the historic Gopinath temple in Vrindavan on Monday to pay respect to the departed soul by singing hymns.  Vrindavan is also known as “city of widows” as widows from across the country come and stay in this holy town.

As is known, traditional Holi is celebrated most riotously in Mathura and Vrindavan, about four hours from India’s capital Delhi, where Lord Krishna is believed to have spent his childhood.

Some associate Holi, “the festival of colours” from the childhood tales of Lord Krishna, a reincarnation of Lord Vishnu, who played pranks with the village girls by drenching them in water and colours.

Others view the burning of large bonfires on Holi eve as symbolic of burning the demoness Holika. The destruction of Holika is mentioned in the Hindu text, the Narada Purana. Holika’s brother, the demon King Hiranyakashyap, apparently wanted her to burn his son, Prahlad, because he followed Lord Vishnu and didn’t worship him.