Biden was left with no choice: US’ own vaccines depend on Indian ingredients! 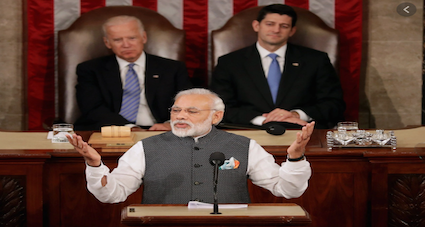 The US president Joe Biden has just about cut the very tree on which it was hoping to pluck the cherries in the Indo-Pacific region.

New Delhi would receive $100 million shot in Covid-19 war from Washington, beginning today, and the list of oxygen cylinders (1000) and 20 million AstraZeneca vaccines, among others, would’ve ideally ingratiated India to the United States. Instead, it might be too-late a measure to keep itself in India’s good books.

The Biden administration had bluntly refused to offer India any help, and denied ingredients necessary for the production of Covishield vaccination. But the US had to came around when told, most likely by National Security Advisor Ajit Doval, that its own vaccination programme was at the mercy of India! Next, we had Biden calling up Modi: Apology on lips, bounty on offer.

You see, the Pfizers and Moderna vaccines can’t do themselves without an Indian company. VAV Lifesciences, and its subsidiary VAV Lipids, are suppliers of synthetic phospholipids which make US vaccines a reality. Biden was told, you are cutting your nose to spite your own face.

Hence, the turnaround by the United States. It was left with no choice.

Much as our NDTVs and Indian Express, Times of India and Hindustan Times gush about the generous Americans, the Indian readers ought to know a wall has come up between Indo-US relations. US could kiss goodbye to India for any meaningful role in QUAD. New Delhi would remember that it had ignored domestic opposition and waived regulations to send across 50 million hydroxycholorquine tablets to US shores on Trump’s SOS; a year later, when it was India’s turn, the US had slammed its door shut till its hands were forced.

It’s unlikely that New Delhi is not connecting the dots.

It’s in public domain that Joe Biden’s son, Hunter, was receiving a $10m annual fee from a Chinese billionaire for “introductions alone.” Fox News confirmed of an email which mentioned “10 held by H for the Big Guy” (purportedly, Joe Biden himself). It’s an email from May 2017 when Biden was no better than a private citizen.

Then there was this US warship in Indian waters. Not only they didn’t seek India’s consent, they also swaggered in public that it was not needed under international convention on seas, when the US itself isn’t a member of this global community!

Doubts have lingered long about Biden administration being soft on China despite public posturing and a few slaps on the wrist. India also is not unmindful that USCIRF (US Commission on International Religious Freedom), a body hostile to non-Abrahamic faiths and funded by the USAID, is being anything but friendly to the Modi government. There are also increasing instances of attacks against millions practicing the Hindu faith in the state-sponsored US universities.

The Biden administration now must brace itself to India’s refusal to junk the order on S-400 missiles it has placed with Russia. There is little indication that Biden has driven India into the arms of China though.

India, the second biggest army in the world, one of world’s top arms importer, the fifth biggest navy of the world, a region vital to trade and multinationals of both the US and China, would only deal with Washington and Beijing on equal terms. For those who missed India’s foreign minister Dr S. Jaishankar’s sharp words to the United States, albeit veiled, when ingredients had initially been refused to Indian vaccine manufacturer, is worth a repeat:

“On international day of multilateralism and diplomacy for peace, let us reflect on its two central challenges. Multilateralism needs to be reformed to be credible. And it must be practiced, not preached.”

On International Day of #Multilateralism and Diplomacy for Peace, let us reflect on its two central challenges. Multilateralism needs to be reformed to be credible. And it must be practiced, not just preached.

It’s a safe bet for Indian citizens to make in coming days: There would be increased hostility from US Congress, religious and human rights groups, NGOs and Foundations. It would duly be amplified by the Lutyens Media.

One proof is enough to betray their complicity: You wouldn’t have read any negative piece against the Biden administration in Lutyens Media in last three months; you won’t read any over the comings months and years too. They would prefer to keep you drooling on Kamala Chachi and Indo-Americans in the White House.

All this charade on democracy—oldest in sync with the biggest—is a hogwash. The United States is friendly to India only because it can’t do without it in Indo-Pacific waters. It’s hypocrisy is legendary: BlackLivesMatter but HumanLivesDon’tMatter. It hates India’s rise.

Necessity produces its own solution: Like Bharat Biotech is now making a vital ingredient—Adjuviant—indigenously after the US embargo. Covaxin, its already been said, neutralises 617 Covid-19 viruses.

India is India’s best friend: Not US or China. And certainly not Lutyens Media.