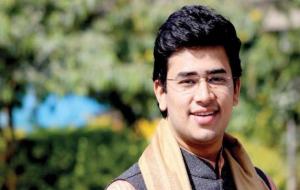 The announcement ended the suspense around the possibility of ticket being given to Tejaswini Ananth Kumar, widow of late sitting MP Ananth Kumar.  In anticipation of being offered the ticket, Tejaswini, on Monday, tweeted to reaffirm her commitment to the party.  But the party has put faith in the youth.

Tejasvi Surya, who has prefixed ‘Chowkidar’ to his twitter account, tweeted, “OMG! I can’t believe this. PM of the world’s largest democracy & President of the largest political party have reposed faith in a 28-year-old guy, to represent them in a constituency as prestigious as B’lore South. This can happen only in my BJP. “

Ms Tejaswini Ananth Kumar also supported he decision, as she tweeted, “I told them (her supporters) AnantKumar Ji always believed in: Nation first, Party Next, I last. On the same, let’s abide by the decision of central leadership & work towards.”

If Tejasvi marches successfully in next Lok Sabha he will be the country’s youngest Member of Parliament, replacing Dushyant Chautala whose date of birth lies on 3rd April 1988.

BJP is said to be consistent with its policy of 2014 of not distributing tickets to its very old guard beyond 75 years in age. Announcing its candidates in Chattisgarh, BJP has not given ticket to any of the candidate of 2014. Former CM and his son are also out of the list. The thrust is on youth and list of nine candidates has been announced in the state and all the candidates can be termed as ‘youth’ in political terms.

Congress has its own spin on “young” candidates. Karti Chidambaram, in cross-hair of investigating agencies of the land, is a Congress candidate. Another young, Imran Masood who has been given a Congress ticket from Saharanpur (UP) had declared in 2014 that he would cut Modi to pieces if he dared to enter his constituency.