Chacha-Bhatija, the Islamist Card in Bengal and the so-called ‘secular’ parties 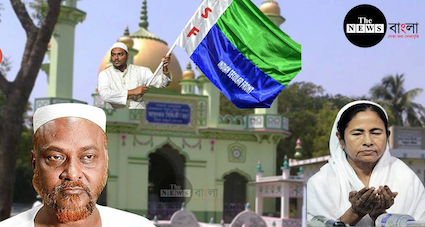 West Bengal is observing numerical muscle-flexing of Islamists in Poll-bound West Bengal. While Islamic Clergy has been arm twisting West Bengal CM for last 10 years, Furfura Sharif has been the one religious institution wielding enormous influence in the State’s politics. It’s the second most prominent bazaar in the country after Ajmer Sharif in Rajasthan.

Entire Muslim Ecosystem of West Bengal is thus nestling under the two wings of Furfura Sharif. Election time dynamics between the so-called secular parties and Muslim clerics further substantiate why and how West Bengal turned into a Clergy-controlled State in Mamata Banerjee’s reign.

Though Twaha and Abbas pose as opponents in the electoral game, Chacha-Bhatija duo would take no time to coalesce together for power and political gain. Asaduddin Owaisi’s AIMIM seems to have great prospects on the land of West Bengal in coming days and Bengal has no reason to be happy.

While TMC is known for their unapologetic Muslim-appeasement, Congress and CPM too couldn’t move without ‘Muslim crutches’. This is because a sizeable share of their votes came from Muslims which might shift this year to Indian Secular Front led by Abbas Siddiqui. Hence, they couldn’t afford to stand in conflict against ISF but including it into their own portfolio became existential compulsion for both Congress and CPM. This implies—not only Trinamool Congress, Congress & CPM too were winning predominantly Muslim-dominated constituencies which they might not be able to crack this year because of Abbas Siddiqui.

While Trinamool Supremo Mamata Banerjee could claim Muslim community to be her ‘Milch Cattles’  and has gone out of her way to provide unjustified amounts of Governmental grants in Minority Welfare Projects, Congress-LEFT Alliance too couldn’t stay away from declaring their official support for Muslim Clerics before assembly polls.

This leaves no doubt on Muslim-vote dependence of the so called ‘secular’ parties of West Bengal such as TMC, Congress & CPM. Lion’s share of their votes comprise Muslim votes. While English word SECULAR means non-religious, the term is being used to mean ‘Islamic’ in India.

Twaha & Abbas are two wings of fire under which all TMC, Congress & CPM have comfortably slipped in as bagging Muslim votes had been a time-tested mechanism for electoral gain in West Bengal. Furfura Sharif appears to have placed a fair grip on WB’s polity artfully utilizing Chacha-Bhatija duo. Now is  time for Non-Muslims of West Bengal to decide whether West Bengal would retain its core identity as Hindu Homeland or Furfura would come to forefront in ruling the State.