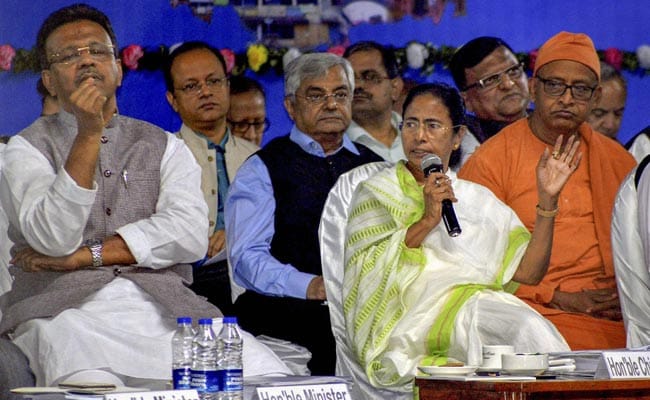 In politics,  you sleep with strange bedfellows yet the changing tacks of Bengal chief minister Mamata Banerjee to woo Hindus nobody had seen coming.

The acerbic “Didi” who takes affront even on a greeting as innocuous as “Jai Shri Ram” today observed the death anniversary of Dr. Shyama Prasad Mookerjee (June 23, 1953), the founder of Bharatiya Jan Sangh which has morphed into Bharatiya Janata Party (BJP) and is giving her sleepless nights.

It hasn’t stopped at this alone. Mamata has also removed Firhad Hakim, the urban development minister in her cabinet, as chairman of Tarakeshwar Temple Development Board and replaced him with Dr. Ratna De Nag, an ex-MP.

The sweetest irony is in the case of Dr. Mookerjee, who fought Article 370 tooth and nail and left Pt Jawaharlal Nehru’s cabinet in a huff, and whose bust was vandalized in Kolkata during “Didi” reign itself last year. Now Ms. Banerjee has taken a complete U-turn, such are the compulsions in politics.

Dr. Mookerjee was a staunch nationalist, fought Article 370 tooth and nail and left Pt. Jawaharlal Nehru’s cabinet in a huff. His death while in custody in Kashmir was described by former Prime Minister Atal Behari Vajpayee as a conspiracy by Nehru.

In case of Tarakeshwar Temple Development Board, the appointment of her close aide Firhad Hakim as its chief was greatly protested by th BJP in 2017, terming it as appeasement politics at the cost of Hindu sentiments. Tarakeshwar Temple is a famous almost three centuries old Shiva temple.

BJP National General Secretary, Kailash Vijayvargiya, had then protested this appointment with a tweet: “Firhad Hakim is the same leader who once said that a portion of port area in Kolkata is like a mini Pakistan.”

Dr. Anirban Ganguly, director of Dr. Shyama Prasad Mookerjee Research Foundation (SPMRF), a New Delh-based think-tank, has reacted to the development by suggesting in a tweet that the change in Tarakeshwar Temple board has come about because of people’s pressure and failure of appeasement politics.

Mamata Banerjee seems seriously shaken by the Lok Sabha elections in which her party TMC barely was able to beat the BJP challenge—23 seats to BJP’s 18. The videos where she is seen threatening people who chant “Jai Shri Ram” and the recent strike by doctors has cast her image in stone as an arrogant and autocratic leader. With the assembly elections due in 2021 and the writing clearly on the wall, Mamata Banerjee is apparently changing her tacks.

Or is it? For the latest reports emerging out of Bengal is no abatement in the violence unleashed against her opponents, particularly BJP.

The coming days in state politics would be worthy of our attention.