Freedom House et all are blots on free world: Openly Left and partisans like hell 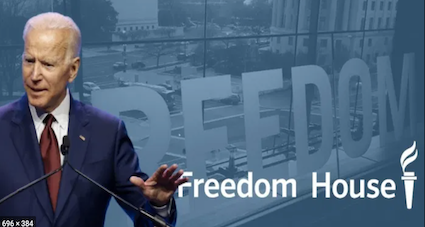 In its annual report on global political rights and liberties, US watchdog, non-profit Freedom House downgraded India from a free democracy to a “partially free democracy.”

But, there are the million-dollar questions that cry out for answers

First, how valid these ratings are — Is it a conclusion based on objective, accurate data or is it the outcome of a shoddy, arbitrary, and biased analysis?

If you see, Freedom House, according to them, is to promote democracy across the world. Its website claims that it “speaks out against the main threats to democracy and empower citizens to exercise their fundamental rights through a unique combination of analysis, advocacy, and direct support to frontline defenders of freedom, especially those working in closed authoritarian societies.”

However, it should be mentioned right away that its authors have a particular understanding of freedom, and based on that they rank the countries. This is John Stuart Mill’s transformed idea of negative freedom; i.e., freedom from obligations, traditions, values, etc., which is also responsible for the West’s concepts of gender reassignment and Cancel Culture aimed at destroying heritage and falsifying history. The report also channels John Perry Barlow’s radical libertarian ideology, which holds that the Internet generally should be off-limits for any and all government oversight.

Now, the validation of any report is based on the methodology that is used to derive the conclusion. If you see, the majority of markers that are used by Freedom House are more subjective than objective in nature which means the responses to questions can be tweaked to obtain an outcome that one wants — The Freedom House 2021 report, unfortunately, portrays the manufactured truth, not the accurate one.

Freedom House splits the world’s countries up into three categories – free, partly free, and not free. In 2020, there were 82 free countries, four less than in 2015, but the number of partly free remained unchanged at 59. The number of not-free countries is higher, however, increasing from 50 in 2015 to 54 in 2020.

The recent report released by Freedom House clearly shows that it has taken a strong partisan turn to the Left in examining nations that it recognizes as free societies.

The report reveals a consistent pattern of partisan bias as it places countries like Russia, Turkey, and Vietnam under the not free category and countries like Ukraine, where any opposition is ruthlessly suppressed, the Kingdom of Morocco, which is governed by a traditional monarchical institution, Pakistan which is infamous for its restrictions in the financial domain is classified as partly free.

In addition to its ideological bias, the report’s methodology is opaque. For example, nations are even penalized for “high prices” for Internet services. This means that less densely populated nations like Australia, Canada, and the United States, where the deployment of broadband is significantly more costly than in more densely populated nations like India, China, South Korea, and Japan, have less “Internet freedom”.

The report states that 45 countries have seen a significant decline in democratic freedoms. Those highlighted include Belarus, Algeria, Hong Kong, Ethiopia, India, and Venezuela. Let us focus on the changes in those indicators that Freedom House asserts were critical to the downgrade.

The coronavirus pandemic was the major cause that resulted in the fluctuations in freedom levels. The report explicitly mentioned a point that in countries like Spain, Great Britain, India, China, Canada, Argentina, Brazil, Venezuela, Colombia, Iran, Thailand, Philippines, and for some reason, El Salvador also, as police force were used to disperse the anti-lockdown protestors, it was a violation of human liberties.

But one needs to understand that what is done during the overwhelming deadly pandemic was necessary to stem the spread and save human lives and to call this stern but salutary measure a violation of civil liberties is not only nonsensical but ridiculous.

Freedom House monotonously repeats the talking points of the progressive Left. “The enemies of freedom have pushed the false narrative that democracy is in decline because it is incapable of addressing people’s needs. In fact, democracy is in decline because its most prominent examples are not doing enough to protect it. Global leadership and solidarity from democratic states are urgently needed. Governments that understand the value of democracy, including the new administration in Washington, have a responsibility to band together to deliver on its benefits, counter its adversaries and support its defenders”, the report states.

To justify the low score on the freedom of media, the report refers that the Saudi government was involved in the murder of journalist Jamal Khashoggi, claiming that Crown Prince Mohammed bin Salman gave the orders to kill the Saudi journalist. However, one became curious, if Saudi Arabia’s king was responsible then why the US government didn’t impose any targeted sanctions against him? Why no measures were taken against the main culprit and sanctions were imposed against 76 individuals, whose names nobody knows to date?

It has already been revealed that Freedom House is funded wholly by the US government and receives massive grants from George Soros’ foundation, so does it imply that the U.S. Friendly States judged to be more democratic?.

Even the report was written by two women, Sarah Repucci and Amy Slipowitz. There were no black people or gender balance. Is that fair? Because it was only last year when people protested against white supremacy in America?

India’s external affairs minister S Jaishankar also slammed them for their “hypocrisy” and he said, “You use the dichotomy of democracy and autocracy. You want the truthful answer — it is hypocrisy. Because you have a set of self-appointed custodians of the world, who find it very difficult to stomach that somebody in India is not looking for their approval, is not willing to play the game they want it to be played. So they invent their rules, their parameters, they pass their judgments and then make out as though this is some kind of global exercise.”

In conclusion, it is very clear that the Freedom House is nothing but the propaganda of the US government- a report that reeks of prejudice; a summary of half-truths, and lies derived from dubious, bigoted sources.