Freedom to practice religion: Whatever happened to Constitution? 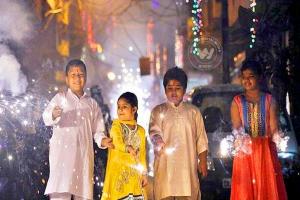 The Supreme Court order states that there would be no sale of firecrackers in Delhi NCR this Deepawali. Though the effects of Deepawali firecrackers on pollution, the apex court admits, is unverified.

What is verified is that diesel cars cause huge pollution; as does the dust and the stubble burning by farmers. (Scientific studies and data are there for all to see).

The Goddess of Justice, we all know, has her eyes covered as a show of evenness. Thus the justice is arrived on the basis of evidence and arguments. But this evenness seems to be missing when the Goddess is able to hear the shrieks of injured bulls in Jallikattu but somehow the heart-rending cry of goats on Bakrid escapes her attention.

The Goddess which is sensitive to injuries of youngsters during Dahi Handi festival, somehow is immune to faithful bleeding themselves silly during Muharram.

Those worrying about waste of water during Holi have no qualms in visiting stadiums during Indian Premier League (IPL) which are kept in prime shape during scorching summer by abnormally high use of water.

It has come to a stage when to celebrate Durga Puja one has to ask the Courts to intervene; or similarly so during Saraswati Puja.

It’s only logical that people thus question that when the Indian Constitution has guaranteed the celebration of religious festivals to all citizens, how come the majority in this country could claim a sense of Freedom Denied.