Gambhir gets under the skin of Kashmiri dynasts 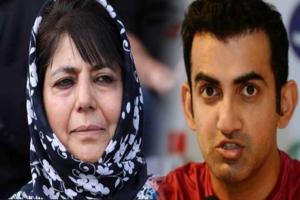 Bharatiya Janata Party seems to have discovered a firecracker in former cricketer Gautam Gambhir with an ability to get under the skin of seasoned political opponents.

Gambhir has riled heavyweights in Jammu and Kashmir politics, dynasts Mehbooba Mufti and Omar Abdullah, to the extent that the former has blocked him on her twitter handle and the latter is becoming shriller by the minute.

Gambhir couldn’t hold himself back when Mehbooba tweeted ““Na samjhe gaye to mit jaugo aye Hindustan waalo. Tumhari dastaan tak bhi na hogi daastono mein (If you don’t pay heed you would be wiped out Indians. History books won’t even have your mention).” He replied: “India is not a stain like you which can be wiped out.”

The jibes between the two turned intensely personal. Mehbooba mockingly worried about Gambhir’s mental health before blocking her. Gambhir did even better: “How would you block 1,365,386,456 Indians.”

Recently, Omar Abdullah had the bitter taste of Gambhir’s acid reaction when the former wondered if it was time for Jammu & Kashmir to have a separate Prime Minister and President. “More than a separate PM, Omar Abdullah needs some sleep followed by a strong coffee! If he still doesn’t understand than a green Pakistani passport.”

As Omar Abdullah questioned Gambhir’s credentials on commenting on sensitive political issues, and asked him to stick to cricket, Gambhir rebutted: “Never mind your lack of cricketing prowess but Kashmiris and our country would have been well-served if you knew a thing or two about selfless governance…Better clean your reading glasses.”

Those who know Gambhir are aware that the former India opener calls a spade a spade and pulls no punches. It has nothing to do with his formal association with Bharatiya Janata Party in recent days. Even in his cricketing days, he was known to be sensitive to poor and the well-being of families of martyred soldiers.