Has mob taken over this country? Would we the billion remain hostage to a few? 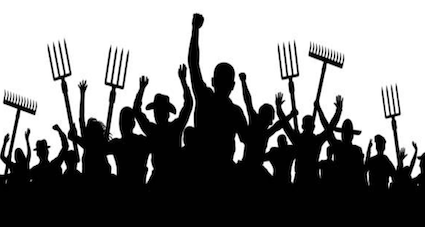 Look at it anyway, the party in power has looked powerless since its re-election in 2019 in front of mobs.

Prime Minister Narendra Modi has been attacked from Kolkata to Kapurthala to Kannur—in a manner of speaking—with words and defiance.

All of them are undemocratic, certainly vile, yet but for some files moving between babus, none have paid the price.

If they had, with jobs gone and criminal action in process, we wouldn’t have been witness to wolves running wild in our orchards.

Sure, the State politicians leave bureaucrats and police as nothing better than doormats at the gates. They have reasons to fear for life within a rogue State which arguably is in bed with Islamist and Khalistani forces.

But States have to be answerable to Centre if the message is lawlessness and  a billion citizens fear they are in a vipers’ colony.

If it happens with the PM, what chances ordinary lives have?

News have rattled along about the helicopters being denied permission to land; babus failing to turn up when the Prime Minister comes calling on swampy fields after floods; and now this one in Punjab where it’s knowledge that the protestors were told about the PM’s road visit by none other than the Ferozepur SSP.

Who are these farmers anyway who are protesting even after farm laws have been dumped?

And who are the police officials who are egging them on?

And who are the bosses who is holding these cops on strings?

And indeed if the bosses themselves are in thrall of Khalistanis, if not ISI, which jeopardizes India?

But these questions don’t seem to concern any. It didn’t in case of Bengal where, take a referendum in the country, Islamists are believed to be running the show.

Nor in Punjab where violators of Indian flag, on Republic Day no less, are felicitated; the criminal charge against them amounting to nothing.

Has mob taken over this country?

Does it take only a few hundred to block the roads and cause inconvenience to millions, not to say their livelihoods, for months?

Does it take only a few with swords and knives to carry out pogrom after seizing power in assembly polls?

Who reins in these rogue States, and their lumpen organs, if judiciary goes to sleep and the Power is too ambivalent as long as the Counting Day of Polls is theirs?

What about common masses who just want to live their day, adding to theirs and nation’s productivity?

What about millions of those farmers who were not at Delhi’s gates and were thrilled beyond words at new farm laws?

What about those persecuted minority who lost everything in our neighbouring Islamic countries and can’t find refuge in India because CAA has fallen to anti-Muslim propaganda?

Such incidents would now be norm. Would even get worse. Because neither our executive nor our judiciary  is squaring up and telling the rogues who is the boss. Media in any case is devil in plain sight.

Do only a handful run this country? Do billion lives count for nothing? Is this the democracy we line up in melting heat to vote for?

Who gains if this neglected billion chooses to take the matter in their own hands? Could then our judges retire in ante-chambers and our rulers in bungalows and still feel safe, if not guilty?

Crack the whip. Be the ringmaster. They could have their newsprint, the universities, the state secretariats, the thanas etc but you have the baton. Masses in this country would call that a democracy, where the wellbeing of majority is not hostage to a few—and they are not merely making up numbers.