He aimed “Bharat Jodo” on Quit India Day: But is ‘framed’ on ‘anti-Muslim’ charge! 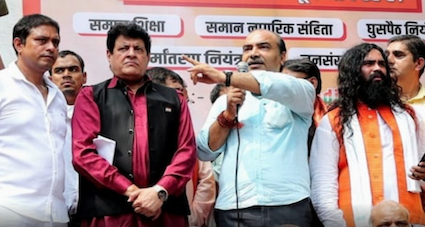 It had all the making of a noble mission. On the upcoming 75th anniversary of India’s independence day, Ashwini Upadhyay, a Supreme Court advocate and a former BJP spokesperson, decided to launch a “Bharat Jodo Movement” at Jantar Mantar in the Capital yesterday, inviting all like-minded Indians to raise their voice against archaic British laws which continue to govern us.

As Upadhyay wrote on Facebook, he was seeking a repeal of 222 English laws, including Indian Penal Code 1860, Police Act made in 1861 etc; and introduction of one law on the matter of judicial, population, penal, labour and religious affairs etc.

Little did Upadhyay know it would snowball into something entirely different with a police case filed against him for having “anti-Muslim slogans” raised in his meeting and organizing the event without the due permission from authorities. What’s worse is that it gave Asaduddin Owaisi in Parliament a handle to beat the Narendra Modi government with.

Owaisi bristled with anger in the Parliament today, terming it “genocidal slogans” against Muslims and no action taken yet against the participants.

The Hyderabad MP aimed potshots at the Prime Minister Narendra Modi and said such slogans were raised at Jantar Mantar which is 20 minutes away from the PMs residence.

“After all, what is the secret of the growing courage of these hooligans? They know that the Modi government stands with them. On July 24, the Central government under National Security Act (NSA) had given the Delhi Police the right to detain any person. Yet the Delhi Police is quietly watching the spectacle,” Owaisi said.

It was also claimed that the event was organized without due permission from the authorities. It was also alleged that Covid-19 protocols were ignored during the event.

A livid Upadhyay lost little time in writing a letter to Deputy Commissioner of Police, claiming he had nothing to do with the alleged anti-Muslim slogans during the event. He also clarified on the issue of “no-pre-permission” acquired and Covid-19 protocols ignored.

“A video is going viral on social media in which a person is giving crazy speech. Some people are sharing this on Twitter, Facebook and WhatsApp to defame me while the people in the video I neither know, nor have I met any of these, nor were they invited.”

It’s also said that the video began circulating around 7 pm on Sunday evening while the event organized by Upadhyay was over by 12.30 in the afternoon.

On the issue of non-permission granted for event, Upadhyay said its required for social, political and cultural events. This was a historic event and hence permission was not needed. For it was on August 8, 1942 only when the Quit India movement began. Yesterday’s event was to celebrate a momentous day in Indian history.

Upadhyay was also quoted as saying since people began arriving in great numbers, and the Covid-19 protocols were strained, he decided to wrap up the event after an hour or so.