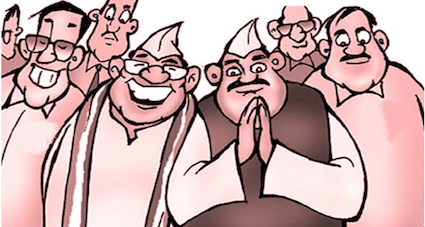 The health ministers of Punjab, Rajasthan, Chattisgarh and Jharkhand—all Congress-ruled States—held a virtual press conference with select media on Sunday and said Centre should also make vaccines free for those between 18 and 45 years, like it has done for those above 45 years, . Never mind that initially all of these States had announced vaccines free for its citizens.

Non-BJP states have further objected that only 50% vaccines is rationed to them. Never mind that the rest 50% which Centre procures is also for States only. Centre doesn’t have any territory of its own in India to play and party.

These “Blame-Wallahs” are also moving heavens that while Centre is procuring its vaccines at Rs 150 per shot, they are being charged even twice or thrice as much. They would never tell that these vaccines, Rs 150 and all, is still being distributed amongst States free. They don’t have to spend a penny!

We also hear that these non-BJP states are lamenting that vaccines which they could procure from “open market” is costly. I seek your indulgence to the statements below where Congress’ own, Rahul Gandhi, Shashi Tharoor and Abhishek Manu Sanghvi etc, had not long ago boasted States could look after themselves only if Centre was to “open up” the vaccination process even if at “higher prices.”

Here are examples of Congress party asking for opening up vaccination process
A) @RahulGandhi in letter to PM: “Give states greater say in vaccine procurement and distribution”
B) @DrAMSinghvi: Asking for private players
C) @ShashiTharoor: For open market at higher prices
4/10 pic.twitter.com/nsJ4lYCogE

Rahul Gandhi, in a letter to the prime minister Narendra Modi: “Give States greater say in vaccine procurement and distribution.”

This is what Tharoor said: “The government should have allowed vaccines to be sold in the open market at a marginally higher price, so people had the choice to take it when they wanted.”

Sanghvi for you: “With the advent of the wave, shouldn’t the Centre open up the vaccine market for all concerned and allow private players to supply/apply through all means available. Desperate times call for desperate measures indeed.”

Now look at how this clamour was amplified by media hostile to Modi government: ThePrint’s founder Shekhar Gupta, TheWire founder MK Venu and Times of India’s Sagarika Ghose in her tweet slammed the Modi government for “not ending the licence permit Raj.” Tweeted Sagarika Ghose: “…Open up vaccine delivery to private sector and let vaccines become widely available for sale…”

All asked for open market. 5/10 pic.twitter.com/qyVhf65c1H

So you first oppose lack of free-hand to States; once given free-hand, you complain on pricing, having yourself advocated “open markets” in the first place; and now ask your quota to be made “free” having promised it so to citizens with a puffed chest.

You have the instance of Arvind Kejriwal being hauled through the coals by Delhi High Court for not even picking up the Oxygen “quota” which the Delhi chief minister had asked for with an eye on gallery.

We also have this charge of Modi government favouring Serum Institute for “profits” in vaccines. Now, the Centre didn’t extend a penny when Serum took the risk of mass-producing Covishield out of its own pocket. When we are told Serum is charging more in India than it’s elsewhere, it’s not told that’s because the Covishield producers AstraZeneca–Serum is just a manufacturer–had negotiated differential pricing with other countries. That if Serum is asked to scale up production, and ingredients are being withheld by the West, it needs finances. You don’t fund them and you also don’t let them charge price which could keep them afloat. Even if it’s for profits, what’s wrong? Aren’t we a liberalized economy? Didn’t they clamour for “open market” in the first place?

From doubting the efficacy of vaccines in public—but taking a shot in private—and running down the vaccination programme which is being run in consensus with the States, on scientific lines and as per the guidelines of World Health Organization (WHO)—some political scoundrels seem hell-bent in feeding on dead. They couldn’t care less if you or I die. It’s a god-send windfall to these rogues.

This crisis would also pass. But Indians hopefully have ingested their lessons. That they are largely on their own in this rotten system. That if they have the choice of just one strike, they should reserve it for media. I have little doubt Lutyens Media is India’s biggest threat. Their propensity to whitewash crimes of politicians, and airbrush them every morning, does two things: One, allows politicians to speak every lie bigger than the previous one; and two, keep us drugged into ignorance.

Fight them for your own good, for your kids. It’s enough to take care of your India.