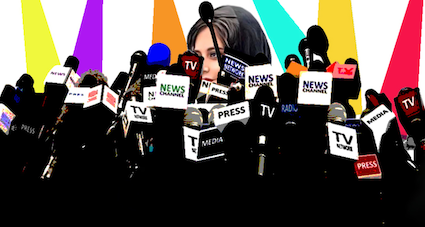 My default position is to question the narrative of mainstream media who suffer from amnesia in likewise incidents elsewhere.

The Hijab riots in Iran is one such moment where newspapers are spewing venom:

CNN: “Iranians are risking it all to protest. Their families say some of them aren’t coming home.”

The Guardian: “Rage against the Regime”

France 24: “Mahsa Amini’s death is the straw that broke the camel’s back.”

Such hysteria, you could be sure, comes in lockstep with grandstanding by Western leaders: For instance, the US president Joe Biden has lauded the “brave women of Iran” for “demonstrating to secure their rights.”

Thereafter, you see people taking to streets in London, New Yorks and Paris of our world.

It happened with Arab Spring, Hong Kong, Taiwan, Ukraine or against Serbia.

Now such hypocrisy is all evident when nothing of the sort happens, for example, on millions who have starved to death in Yemen;

Or thousands killed by Ukrainians in Donbass since 2014 which has led to the present crisis;

Or Gulf monarchies when they snuff life out of inconvenient journalists (Jamal Khashoggi);

Or when the beacon of journalism, Julian Assange is framed on fake rape charges by those who swear by “freedom of expression.”

How It All Began

It all began when a 22-year-old Mahsa Amini died in a Tehran hospital last week after she slipped into a coma while receiving guidance to wear Hijab properly by instructors in Tehran.

Now the CCTV footage shows the young girl walking into the “class room” along with other women. Then she collapses on the floor, seconds after talking to a female police officer about her choice of clothing.

Since then the facts have surfaced that Amini had an underlying heart condition; that she had a brain tumour surgery at the age of 8; was a regular visitor to neurologists; and importantly there was no sign of injuries on her body.

Interestingly, it was all coming.

No less than China’s president Xi Jinping had warned so in the recent SCO (Shanghai Cooperation Organization) Summit in Samarkand, Uzbekistan.

Xi had called upon the Central Asian nations to prevent “external forces” from lighting up “colour revolutions” in the region.

Within hours Xi’s concerns had come true: Thousands marched on streets of Tehran and other Iranian cities and demanded the overthrow of the Iranian regime.

So what is “Colour Revolution”?

Why is it all staged and not organic?

Initially it was all staged by the CIA (Central Intelligence Agency) of the United States but then a succession of scandals in the 1970s made Washington look for public rather than official means to achieve their ends in overthrowing inconvenient regimes.

Thus came the National Endowment for Democracy (NED), a US government agency founded in 1983. It was created no less by the CIA itself, or rather its director William Casey. He looked to construct a public mechanism to empower oppositions, activists and media within to destabilise and displace independent regimes.

This is how NED was described by Washington Post in an article: “Covert funding for these groups would have been the kiss of death, if discovered. Overt funding, it would seem, has been a kiss of life.”

The piece included a confession by a senior NED official Allen Weinstein who said: “A lot of what we do today was done covertly 25 years ago by the CIA.”

A CIA whistleblower Ralph McGehee once disclosed that drumming up human rights issue is a standard US Trojan horse strategy and NED is an important instrument towards the goal. “…the NED, USAID, the World Bank etc begin overt or covert operations to modify or replace governing authority.”

That’s the reason, NED was banned by Russia in 2015; as it has been done by various countries in Global South, the countries in Asia, Africa and Latin America who suffer most by such “colour revolutions.”

However, Tehran hasn’t yet banned NED even though there is enough evidence of massive funding by the agency to various projects in Iran.

The data shows that between 2016 and 2022, NED has sponsored 51 separated project to the tune of $5 million in Iran. It committed $45,000 to an unnamed organisation for “human rights monitoring.”

No less than $70,000 was used to finance a “human rights law journal” to raise “awareness among lawyers and civil society actors” on “democratic reforms.”

In recent decades, NED is seen to weaponize lawyers to destabilize a regime to the benefit of Washington, as was the case with Operation Lava Jato in Brazil to bring about a change in the government.

In Iran, the NED has urged those keen in keeping an eye on the protests in Iran to follow the Abdorrahaman Boroumand Center, one of its grant recipient. Now this Centre has received hundreds of thousands of dollars since 2016 to promote human rights.

Same thing happened in Venezuela: the NED granted $83,000 to Washington-based Center for Justice and International Law to train Venezuelan citizens in launching legal actions against their government.

There is then Social Media to hype it up. In 2018, the then US president Donald Trump asked CIA to “run wild” and launch offensive cyber assault on Tehran.

These days there was #OpIran hashtag dominating Twitter which has been analysed to reveal that hundreds of such accounts were created on September 16 following the young woman’s death. Such accounts has only multiplied since in tens of hundreds in subsequent days.  A supposedly private group of hackers has even created a dedicated Telegram channel to incite Iranian citizens to send “videos of abuse”.

I am in no position to say if the present protests in Iran are right or wrong.

I am only tabulating history of the present regime in Iran which has been in power for over 50 years and rarely has had such a big unrest.

But the pattern of these unrest fits like glove the modus operandi of “Colour Revolutions” which, it is established beyond doubt, is egged on by agencies such as NED, working at the behest of the US government.