HINDI: In conversation with Mahatma Gandhi 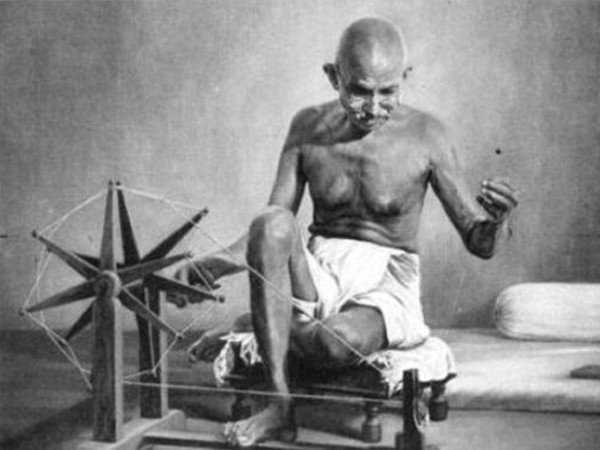 I conversed with Mahatma Gandhi in dreams last night. I was in heaven with a collection of his thoughts and words—“India Of My Dreams”—and spotted the Bapu in a corner spinning khadi wheel. He looked healthy, probably because the sinful Indian Express and The Hindu are barred from heavens. I touched his feet, squatted in front and opened the book which, truth to tell, pleased him. My subject was his views on Hindi language and I had bookmarked his specific utterances on the matter. I read on:

“I have the greatest faith in the Dravidians someday taking up Hindi study seriously. If an eighth of the industry that they put in mastering English were to be devoted to learning Hindi, instead of the rest of India, remaining a sealed book to them, they will be one with us as never before…The Dravidians being in a minority, national economy suggests that they should learn the common language of the rest of India than that the rest should learn Tamil, Telugu, Kannada and Malyalam in order to be able to converse with Dravidian India” (Young India 16-6-’20)

Bapu, do you realize the folly of your words? That how profitable it is for local forces to keep the rest of India a sealed book for its audience? Sure, the Commie rags play their part: They never mention that Adi Shankracharya was a Dravidian; that a host of CBSE schools which teach Hindi are run by DMK/AIDMK leaders. If I was to make your words known to them, your statutes or framed images would be blackened or put to fire.

“Little does anyone know that almost all the Tamils and the Telugus living in South Africa can carry on an intelligent conversation in Hindi.” Young India (16-6-’20).

Again Bapu, how does it matter? Even Latin is compulsory in schools in England. But this is whataboutery. The ground reality is, a famous actor (Kamal Haasan) promises burning fields in his state if Hindi was introduced in the curriculum.

“Bengal and Madras are the two provinces that are cut off from the rest of India for want of knowledge of Hindustani on their part. Bengal, because of its prejudice against learning any other language of India…”(Young India 2-2-’21)

Sure Bapu, Bengal and Madras remain cut off from rest of India to this day. Sure, Mamata Banerjee cries “Bengali pride” from rooftops. Sure, DMK leader Stalin (never mind he has a European and not a Dravidian name) has given a call for agitation against Hindi later this week. I only hope you were more discreet. Just imagine if Prime Minister Narendra Modi was to quote you on the subject?

“A knowledge of English opens up intercourse only with the comparatively few English-knowing Indians, whereas a possible knowledge of Hindustani enables us to hold intercourse with the largest number of our countrymen. (Young India 2-2’-21)

Bapu, they are doing well as it is. They pay income-tax for rest of India. It’s another matter most of it is recovered with interest from the Centre when Chennai drowns in flood once every two years. Most of its population reaps the benefit of Centre’s SC/ST schemes. Why bother?

“If we were not living in artificial conditions, the people living in the South will not consider the learning of Hindi as a strain on them, much less a superfluity….If it is to be for and of the starving millions, of the illiterate millions, of the illiterate women, of the suppressed ‘untouchables’, Hindi is the only possible common language.” (Young India, 18-6-31)

Sorry Bapu, they do speak for starving millions and “untouchables” when the Elections are around. They also speak about illiteracy admittedly though only of Muslims. I am afraid it’s nothing less than “imposition” you are suggesting. All you would do is to produce South Indian versions of Nathuram Godse.

“The cry of “mother tongue in danger” is either ignorant or hypocritical. And where it is sincere it speaks little for the patriotism of those who will grudge our children an hour per day for Hindustani. We must break through the provincial crust if we are to reach the core of all- Indian nationalism. Is India one country and one national or countries and many nations.” (Harijan, 10-9-’38)

Bapu do you realize the monstrosity of your outreach? Do you realize you echo every syllable of BJP/RSS on nationalism? Who would now celebrate October 2 as your 150th birth anniversary in Dravidian India? How long do you think Congress would keep owning you up?

Bapu had long stopped spinning his wheels. He was staring me, long and hard. His spectacles had cracked. The poor goat of his had started bleating. He looked around—none of his favourites, Nehru or Azad, were in heaven. Sardar Patel was a neighbour but had long disowned him for betraying him with India’s prime ministership. The likes of Subhas Bose and Bhagat Singh were never enamoured of him. Gurudev Tagore had long turned sceptical of him. I felt sorry for the great man. The entire Congress party rode on his shoulders for close to a century. They mouthed platitudes on his every birth anniversary. Political leaders made a beeline for Rajghat on his death anniversary. His beaming face adorns nation’s currency. Yet they have shunned his ideology. Gandhi is not for defending; he is a blank cheque to encash for the dynasts.