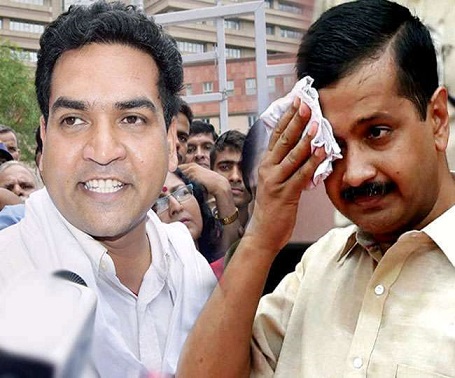 No-nonsense social activist/politician Kapil Mishra, once with Aam Aadmi Party and a minister in the Capital, took out a street march with hundreds of his followers on Delhi streets recently against what he termed as the communal binary with which Left-Liberal-Sickular gang, especially Delhi chief minister Arvind Kejriwal, weighs up crimes in the Capital.

“They have a selective outrage when the murder is condemned on the basis of religion—both the murderer and the murdered,” thundered Mishra.

Mishra and his bristling followers were angry at the silence of this gang at the murder of Dhruv Raj Tyagi whose only crime was that he objected to lewd remarks being passed against his daughter by a neighbour, a Muslim migrant, recently.

Mishra contrasted Tyagi’s death with the one of Akhlaq in Dadri, a part of Delhi NCR, which had the notables of this gang, including Kejriwal, visiting the bereaved family and articles and edits haven’t stopped in Lutyens Media even though it’s been over four years to the incident.

“The incident of Gurgaon where a Muslim family was beaten in their house, was blown out of proportion in national media through the repeated telecasts of the incident’s video but here the murder of the head of the family, trying to protect his daughter, has been denied the spotlight.”

Accused Kapil Mishra, “This is the fourth such incident in Delhi NCR in recent times and the Lutyens media is maintaining a stoic silence. First Dr Narang was killed, followed by murder of  Rohit Basoya, thereafter Ankit Saxena’s neck was slashed in broad daylight. All of them, including one of Tyagi, were committed by members of a minority community. But all those who reached  Akhlaq’s place could not find Tyagi’s house.”

In the Lutyens Media’s alley of recognition and fame, the access is limited to incidents which suit their agenda.  The considerable rally taken out by Mishra has failed to elicit a response from the mainstream.

The well-engrained school of thought of this elitist class, which has, by now, rooted deep in average Indian’s psyche, stone-walls entry of any ‘outsider’.