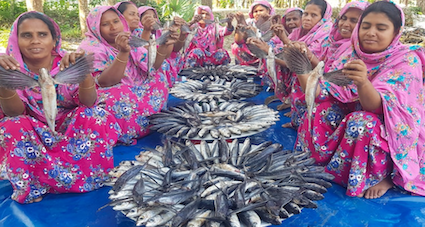 Liton Ali, a software engineer who turned women of a non-descript Bangladesh village into a YouTube wonder, remembers the day he thought of the idea of recording videos.

He had a handful of followers then.

Ali was standing in the heart of a fish market on the outskirts of Dhaka. He had reached the market following a power line along a series of rugged paths, eventually landing him in the office of the district headquarters of Mirpur.

The year was 2017, six years after sleepy Mirpur had hosted the 2011 ICC World Cup jointly with India and Sri Lanka.

Ali had, by then, already watched hundreds of videos of fish markets in Korea, Japan and Africa on YouTube and wanted to replicate the same from the fish markets of Bangladesh.

“Those were tough days,” says Ali. He would shoot videos of fish and vegetable markets with his handset and plug videos of 40-50 minutes duration on YouTube. “I was not happy with the quality of the videos. It was very patchy, but I continued uploading the videos. Actually, I wanted to edit the videos but couldn’t do it.”

It was like farming with hands, without the help of oxen. Ali – nevertheless – continued filming the fish markets, he travelled to as many vegetable markets as he could.

And then one day his maternal uncle, Delawar Hussain, visited Ali and made an unbelievable, no strings attached offer. He told Ali to visit Shimulia village in Kushtia district, once known for its beautiful shawls. Ali asked his uncle why he should visit that village but he never got a clear answer, or one that made any sense to him. He got onto a train and then travelled by bus to reach the nondescript Shimulia village.

The villagers were surprised to see Ali. They were wondering why Ali had landed up in the village and what he planned to do. Many thought Ali was a government officer who was there to distribute cash. The womenfolk of the village, all homemakers, were keen to meet Ali. They had little or virtually no sense of what Ali would do and who would get what and how and from whom and why. Expectedly, a million rumors blossomed. The womenfolk, however, had a feeling Ali was going to work with them. They waited for Ali to start his speech.

In the hinterland, it is not easy to talk to womenfolk, Ali was aware of the pitfalls of what he wanted to do. Ali said he was ready to take the risk.

“I told them I was in the village to create life’s biggest magic, I was to transform their lives, the lives of the women. They all listened to me patiently,” remembers Ali. The entire village had gathered near the school building. Among the crowd were some restless children. Ali explained what he wanted to do.

And then the work started. Ali had organised two video editors and a few friends who would help him shoot the video and edit at the same. The game plan was simple. Let the women of the village cook meals for lunch and record their cooking process on video and edit the same for YouTube.

He does not remember correctly but thinks some of his friends – who had travelled with him from Dhaka – also sang Bangladesh’s most popular song, Shono Ekti Mujiborer Theke Lokkho Mujiborer Kontho which translates to Listen To A Song From Mujib’s Voice Translating Into Million Voices.

The feast started once the cooking was over. The video recording continued and ended only after the feast was over. Ali told the village women that they should continue the practice at a regular pace. The womenfolk, visibly tired, burst into wild applause, ostensibly because they carried home whatever was left of the meal. In two days, the first video was uploaded on Ali’s AroundMeBD channel. The videos went viral.

“It triggered a storm across Bangladesh, across the world,” says Ali. His target was 13 million Bangladeshis living abroad. “I knew they miss their home, village and nation.”

Slowly, Shimulia started breaking headlines, top chefs from across the globe travelled to Shimulia and the village, slowly yet steadily, was lifted out of extreme poverty. Now, the channel has over 4 million subscribers and the most popular video (below) is inching towards 100 million views.

The Bangladesh government followed Ali’s experiment and saw how he was empowering women in the country. Subtly, bureaucrats encouraged young filmmakers and artists to replicate the YouTube village model across other villages.

Ali said his idea was to showcase the simplicity of a Bangladesh village to the world. “I, along with my friends, wanted to show the world how women power can transform lives in a simple village, help some of the poorest people on the planet.”

“We have now 50 people on the rolls, we give them a decent monthly salary. Once we would cook 25 kilos of rice, now it has more than doubled. When we started, there was just Shimulia village, and now people from neighbouring villages also land up for the meals. We have people coming from abroad visiting Shimulia paying for the meals.”

Ali says he saw many who travelled from abroad weeping when people started eating. “Maybe they remember their home, their earthly lives, they feel closer to home.”

Jehangir Alam, a seasoned worker at Dhaka’s plush InterContinental Hotel, says many stay at his hotel before undertaking the journey to Shimulia. “The YouTube village is a unique concept that has caught on very well, others have started copying the concept. There is a Grandpa group where a handful of senior men cook meals, almost like YouTube village. They have a million subscriber base, and it’s growing.”

Alam says many donors he spoke to in the hotel told him their interest in the project was purely philanthropic. Some saw it as a way to improve the lives of people in the village. “They build toilets, homes for the homeless, and fund schools. They get a chance to show their human face.”

“The YouTube village is a revolution to alleviate poverty. It is actually a great confidence building exercise,” says Alam.

Selia Sultana, a young journalist, says YouTube village is a great experiment where an entire village creates content for just one YouTube channel. “I am confident the channel will have over 6-7 million subscribers by the end of this year, earning cash from YouTube.”

Sultana should know. One of the most popular videos got a whopping 63 million views. It means more cash coming to the village from YouTube.

Eventually, cash matters. Ali knows it, so do the women of Shimulia.