Importance of being Jaishankar: Only behind Modi-Shah duo 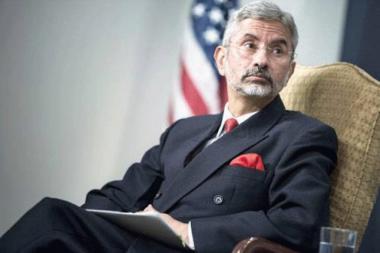 When the troublesome duo of China-Pakistan is breathing down India’s neck on its two flanks and Donald Trump is baring his fangs in United States, India is hot under its collar and Jaishankar has been put on the burning deck.

On the face of it, everything looks cool: India has had a series of significant ticks in international arena, be it tacit approval on its Balakot strike or getting the world behind to outlaw dreaded terrorist Masood Azhar. Significant alliances have emerged in the Muslim world even as Israel is now a very strategic critical ally. Respect for Modi could only grow now that he has been re-elected with a stunning majority in 2019 General Elections.

But trouble is at the door with Donald Trump’s United States determined to punish India over its buying of S400 missiles defence system from Russia. Already, India has lost the tariff benefits which US accords to less-developed countries under the Generalised  System of Preferences (GSP). The Trump administration had held off only because the 2019 General Polls were on in India. But now that it’s over, the $5.6 billion export that India enjoyed against the United States in 2017, would no longer be possible.

Trump is equally determined against India’s buying of S400 missile-defence system from Russia and a spokesman for the US administration has made no bones about it. India was warned on Friday that if it bought $5 billion worth of S400 missiles from Russia, it would have serious repercussions in terms of defence deals with United States.

United States has a policy for the world where countries, howsoever friendly, would be slapped with sanctions if they fostered ties with their adversaries, in this case Russia. The policy is called Countering America’s Adversaries Through Sanctions Act (CAATSA).

Iran is another prickly issue. Trump had given a waiver to India from November to May to buy crude oil from Iran despite the sanctions it has in place against the orthodox Shia nation. But any further extension is completely ruled out.

As reports emerged that India was looking at ways to beat around the sanctions and continue its oil imports from Iran, US has made its position clear: “There will be no more oil waivers granted.” This would push up India’s oil import bills as  Iran used to supply 10 per cent of India’s needs. If US withdraws from Afghanistan, Pakistan would acquire further muscle in its intervention in Kashmir.

India’s troubled borders on its east and west make both China and Pakistan as perpetual adversary and frictions are never far off.

Modi didn’t invite Pakistan in his oath ceremony this week and the latter responded by firing a nuclear-capable Chinese-designed intermediate-range ballistic missile to serve a warning. India too flexed its muscle when just before the 2019 polls, it launched a missile to “destruct” one of its own satellites, becoming only the fourth power after United States, Russia and China to shoot down an object in space.

It’s clear that Jaishankar would’ve his hands full but if there is one person more competent with a better track record than the former foreign secretary, he or she is yet to be seen in India’s diplomatic circles. Over his long tenure, and significant stints in Russia, United States and China, among others, he has acquired a formidable network, his phonebook being the envy of most diplomats.

He was India’s foreign secretary till the last year and his understanding of India’s personnel or policy is unlikely to catch him unawares. He knows the system pretty well.

Jaishankar has worked around different governments but it’s under Modi that his stock has risen up. As India’s envoy to China, he first impressed the present Prime Minister when the latter was visiting China as Gujarat chief minister in 2011. He was there when Modi made his first “rockstar” visit to United States on his election to PM’s office in 2014. Modi promoted him as foreign secretary in 2015. His framework on foreign policy greatly helped his successor Vijay Gokhale as Doklam and Balakot occurred.

Jaishankar is known to be a very hard negotiator. Together with Modi and Amit Shah, he can cut through the government flab. The near future is tough for India but the nation can’t have better men than Modi-Shah-Jaishankar to steer its course. In Hindu pantheon of Gods the trinity of Brahma (creator), Vishnu (preserver) and Mahesh (destroyer) reign supreme. In Modi, Jaishankar and Amit Shah these are today’s political equivalent.