India firm even as US act bully on Iran matter 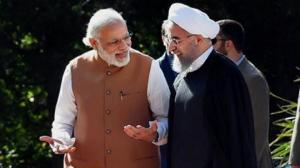 United States wants India to cut down its oil imports from Iran which stands as its third biggest supplier after Iraq and Saudi Arabia. President Donald Trump has followed his pre-election promise with withdrawal from the 2015 Joint Comprehensive Plan for Action (JCPOA) which had enabled China, Russia, France, Germany UK, European Union and the US itself to dilute the economic sanctions against Tehran. Now the sanctions are back in place with the deadline of November 6, 2018 and the world is in turmoil, no less India.

The Trump administration has chosen a new way to browbeat the countries which don’t fall in line. Last August, it introduced CAATSA (Countering America’s Adversaries Through Sanctions Act) to scare those away from trade relations with “hostile” countries such as Russia, North Korea and Iran. International banks and companies which defy the sanctions would bear the brunt. Less oil imports from Iran would hike up the prices and import bills, not just of India but of many around the world. It would hit both inflation and Indian rupee. Since US dominates the re-insurance and payment gateways, bypassing them is difficult.

India’s dilemma is apparent. Before 2005, it paid $12-14 billion annually to oil bills by Iran. But signing the 2005 Indo-US Nuclear Civil Deal, gave New Delhi’s leash in US hands. India voted against Iran in the IAEA General Conference in September the very year; dithered on the Iran-Pakistan-India Pipeline and sounded the death knell of Turkmenistan-Pakistan-India (TAPI) gas pipeline project. By 2014, India had reduced the Iranian oil imports to $4 billion annually.

The US treasury methodically shut down the banking options for India who then began paying Turkey by cash which then converted it to gold bars and sent it across to Tehran. India was in no position to pay oil bills in US dollars. India did try the balancing act: while Reserve Bank of India (RBI) ceased dealing with Tehran-based Asian Clearing Union in 2010, it came to an understanding with Iran to pay half of its bill in Indian rupees in 2012.

But once the JCPOA came into being, India-Iran trade relations grew back to 2012 days. India also decided to pay out $6.5 billion it owed to Iran, held up due to sanctions. Modi government renewed the stalled Chahbahar port project. Its’ ministers made a beeline to Tehran with promises of oil and infrastructural projects. Iran obliged on its part by granting Oil and Natural Gas Commission (ONGC) the gas fields of Farzad B for exploration. The air of optimism only grew better when Iranian president Hassan Rouhani visited New Delhi this February with his oil minister Bijan Zanganeh. India pledged it would double its oil imports from Iran in 2018-2019. Iran, on its part, promised to cut down the freight by $1 per barrel. India pledged to increase import by 500,000 barrels a day.

But now comes the fresh US imposition. Even though foreign minister Sushma Swaraj has reiterated India would only abide by the mandates sanctioned by the United Nations (UN), it’s easier said than done. India and US have a booming trade of $140 billion which could take a grave hit, as well as around $31 billion of bilateral trade surplus advantage India has. Chahbahar port project, which could save millions in trade and increase Afghanistan’s tilt towards India, stands to lose steam. Besides, it just would give a bigger fillip to China to snug closer to Iran, shutting the doors on India.

India would be encouraged by the stand of UK, France, Germany who have expressed “regret and concern over Trump’s disruptive action. The Modi government meanwhile has started to flex its own muscles: in reaction to US postponing the 2+2 dialogue, India has declined US’ offer to host Defence Minister Nirmala Sitharaman. India also seems steadfast in increasing its military deals with Russia which faces similar offensive sanctions from United States.

The one fall-out of all this, including trade barriers ratcheted up by both US and India, is Modi government swinging back appreciably into the China-Russia zone. India has this strategic advantage where countries are looking to wow India rather than the other way around. However, India-US relations for the moment are several notches down than they have ever been since Trump came to power.