Indian Express is specious on ‘Gupkar Gang’ and Kargil analogy. Here’s why! 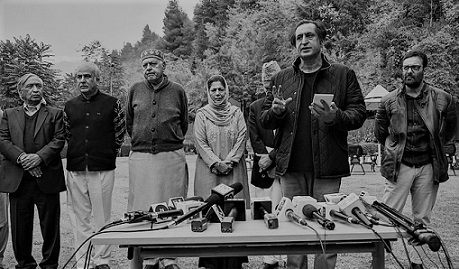 Indian Express is being specious in showing Bharatiya Janata Party (BJP) as double-tongued in calling its rivals as “Gupkar Gang” and yet being ally with National Conference (NC) in Kargil, Ladakh.

There is an editorial too in the newspaper in delicious English which to writers is orgasmic. Let’s first get a few basics out of the way in case you are joining this match in slog overs.

Jammu and Kashmir ceased being a state on August 5, 2019. Regional satraps, Abdullahs (NC) and Mehbooba Mufti (PDP) went into house arrest. All are released now. All want the erstwhile special status for Jammu and Kashmir, now a Union Territory, restored. Farooq Abdullah is publicly asking China–the gravest threat as an entity—if it could help.

Meanwhile, the Centre pushed the political process in motion through elections. It began small, at the district level. The one of LAHDC (Leh)—Ladakh Autonomous Hill Development Council—was held last month. BJP secured a majority. The one in LAHDC (Kargil) is some three years away. In the present Kargil body, elected in 2018, National Conference heads an alliance of 26 elected members. Three of them are from the BJP.

Now the District Development Council (DDC) elections in the other Union Territory, Jammu and Kashmir, are due from November 28 in eight phases. All the regional satraps of the region have joined hands. They did so under the Gupkar Declaration which was an understanding amongst them to restore the special status of J and K. But afraid of missing the bus, they have buried their differences and to hell with J and K’s autonomy. They can’t let DDC elections go. Congress is a part of it, the alliance—People’s Alliance for Gupkar Declaration (PAGD)– having fielded three Congress candidates in the list for first three phases so far.

That has led to Union home minister Amit Shah calling them a “Gupkar Gang.” And that it’s anti-national. And that Congress must specify if they stand with the forces who want Article 370 and Article 35A restored. And now this alliance is blowing back the hot air through the nozzles of tweets and co-opted media such as Indian Express.

So first spot the difference papered over by Indian Express. One, NC and BJP were never in pre-poll alliance in Kargil like Gupkar-Congress is in Jammu and Kashmir. Two, Kargil is not wanting the restoration of Article 370 and 35A as is being done in Jammu and Kashmir. Three, NC in Jammu and Kashmir is as different from one in Kargil as chalk is from cheese. As an analogy refer to Punjab: Captain Amarinder Singh is a Congress chief minister but practically independent. If it wasn’t so the Gandhis wouldn’t have left Navjot Singh Sidhu at his tail.

But Kargil is still in a lower pecking order of Indian Express. The newspaper’s lead today is that Centre is afraid and has practically put the Alliance’s candidate under house arrest. How would they campaign? Meanwhile, the newspaper alleges that the representatives of BJP and its allies are roaming free with a police escort in tow. These are serious charges and one would wait a few hours before I could share its nuances with you.

On a broader point though BJP can’t be afraid. Even if they lose DDC elections, it won’t change things on the ground. It would only cost them talking shop. Article 370 and 35A would remain a thing of the past. And Gupkaris, please stop doing this charade of special status for your beloved J and K. You are now queuing up to join the new J and K. Admit that the sham of “J and K of past” is just a façade to reclaim your dynasty. Arguably to hand it over to Pakistan–and China–by default. Your hapless citizens, all this while, have only been a tool to yield dividends.

All it would do is to afford Abudllahs and Mehbooa a toehold over the ground slipping under their feet. They would have a semblance of power and it would help keep sheep under the flock, whatever is left. It would keep them in the news. In editorials of the likes of Indian Express. But they have been marginalized. Glory is a thing of the past. Its shadow—like of Roshni land scam—is lengthening.

If anything, Farooq Abdullah should be grateful he hasn’t been brought under a sedition charge for openly calling for China when India has an existential issue with the giant neighbour. India is bleeding men and money. You can’t have someone open the front doors and usher the enemy in.