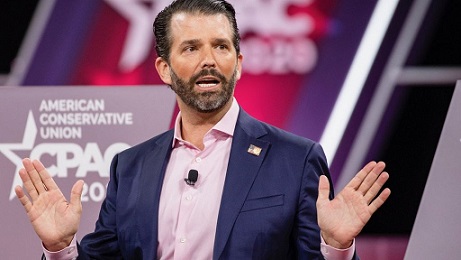 The United States President Donald Trump’s son claimed Democratic presidential candidate Joe Biden will not be good for India as he could be soft on China.

The 42-years-old Donald Trump Jr. is leading a re-election campaign of his 74-year-old father. The presidential elections are scheduled for November 3.

During an event to celebrate the “success” of his book, “Liberal Privilege” that covers graft allegations against Biden and his family, Donald Trump Jr. said “No one understands the threat of China probably better than Indian-Americans.”

“When you look at our opponents in this race… you think the Chinese gave Hunter Biden USD 1.5 billion … because he was a great businessman, or because they knew the Bidens could be bought, and therefore soft on China,” he added further, “Therefore Joe Biden is bad for India.”

Trump Jr. was referring to the latest allegations of corruption against the Biden family as revealed by the New York Post. He also said that there is no clarification received on this incident neither from the Biden’s family nor his campaign team has released any statement dismissing the allegations.

“It is not just China, as they said China Inc with the Bidens, it as the Ukrainian, it was Russia and it was overwhelming because they know that he can be bought,” Trump Jr alleged.

During the event, Trump Jr. praised the Indian-American community and mentioned that he understands the community “pretty well.” He even talked about the Ahmedabad address of his father Donald Trump during his trip to India.

“When I saw the enthusiasm of my father with Prime Minister (Narendra) Modi …you know, I used to think that Trump rallies were pretty big in America but that was the biggest Trump rally probably ever … in India,” Trump Jr said

“The Indian community is hard-working, family-oriented and education oriented”, he added further

Around 2.5 million Indian- Americans are going to vote in the upcoming presidential elections and both the parties are trying hard to woo them and make the shift towards their party.

AI Mason, co-chair of the Trump Victory Indian American Finance Committee has also said that Indian Prime Minister Narendra Modi and Trump share a very cordial relation and no other US President has respected and treated an Indian prime minister or India or Indian-Americans like President Trump has.