Karachi sinks under floods: Imran gets buckets of curses 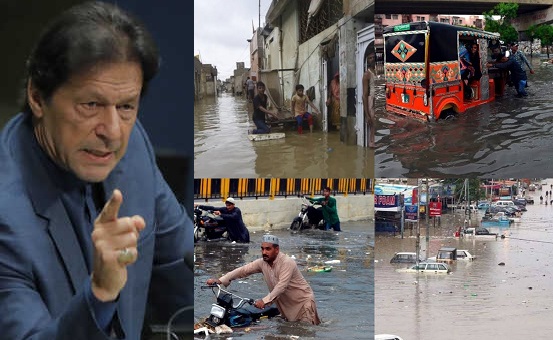 Torrential rains have wreaked havoc in Pakistan’s financial capital city Karachi, which is also its most -populous city urban conglomerate.

Over the last week, intense monsoon downpour over Karachi has plagued the city with waterlogging, flash floods and power cuts.

Karachi received a record breaking 230 mm rainfall in a single day on August 27, making this August the wettest August in 89 years. Overall, at least 139 people have been killed so far in several parts of the country this week.

As the city battles this calamity, experts had warned earlier that Pakistan lacks modern weather forecast radars for timely prediction of flooding

According to the plan, Pakistan has a medium and long-term forecast system capable of accurately predicting the weather for a period of only 7 to 15 days while the seasonal weather forecast accuracy rate is also not more than 65-70 per cent, The Express Tribune reported.

Talking to a TV channel, Saad Ahmed Shah, a senior executive at a financial organization in Karachi, said, “I had to walk for nearly five hours to reach home from my workplace. It was raining heavily and I had to wrap a plastic bag around my mobile phone and other electronic gadgets,”

“Some of my colleagues are still stuck in the office, as it was impossible for them to get back home in these weather conditions, We have never experienced such rains all our life,” Shah added.

Those killed include people who have drowned in their homes, been crushed under collapsing walls or electrocuted by short-circuiting wires”, Dr Seemin Jamali, the executive director of the Jinnah Postgraduate Medical Centre (JPMC), told Al Jazeera on Friday

According to NDMA, the low-lying slums are worst hit where thousands of poor people are struggling to keep themselves afloat. Citizens have been without electricity and mobile phone connection for hours.

The authorities are being blamed by the citizens, press and political parties for this catastrophic situation, saying there had been no preparation before the start of the regular monsoon season.

Karachi has been governed mostly by the Muttahida Qaumi Movement (MQM) and the Pakistan People’s Party (PPP).

Waqar Mehdi, a special assistant to Sindh’s Chief Minister Murad Ali Shah, told DW that the criticism against the PPP’s provincial government was “absurd.” “These are unprecedented rains due to climate change. The infrastructure (in the city) was not strong enough to withstand such heavy rainfall,” Mehdi said.

“I reject claims that provincial authorities do not empower the local government. We provide them with 26 billion rupees (€300 million, $360 million) annually but local officials don’t use them for the city’s development,” the provincial official said.

But Raza Haroon, the secretary general of the Pak Sarzameen Party (PSP), a splinter group of the MQM, holds the PPP responsible for Karachi’s woes. “We can only tackle the situation if the powers are decentralized to local bodies.”

The opposition’s charge is that in the 2018 election, Prime Minister Imran Khan’s Pakistan Tehreek-e-Insaf (PTI) party won 14 out of 21 National Assembly (lower house of parliament) seats from Karachi. Sindh’s governor also belongs to the PTI yet it hasn’t done anything for the city.

The multiple fragmentation of power has only added to the city’s woes.

Experts blame the unregulated, uncontrolled and unplanned construction that has led to blocking and damaging the drainage system of the city.

Pakistani prime minister Imran Khan said his government would “be announcing a plan for a permanent solution to the problems caused by floods by cleaning of drainage channels, fixing of the sewage system and resolving the huge challenge of water supply to the people of Karachi”.

“In a way, we are responsible for this crisis, for handing the reins of our city to corrupt politicians. We should blame ourselves,” said Shah.