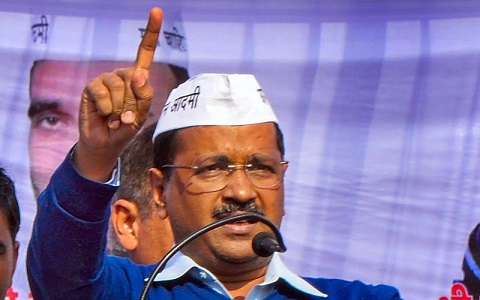 With political extinction looming large, Arvind Kejriwal is making some desperate populist measures to ensure his Aam Aadmi Party (AAP) could hold its own in the assembly elections due next year.

The latest is to make travel free for women commuters in Delhi metro, a suggestion he made at a public meeting in the Capital on Sunday: “It’s been done to encourage women to use public transport.”

Along with his declaration, Kejriwal also said that he is planning to bring down the fixed charge component of electricity bill and is in touch with power regulator companies of the city.

Kejriwal’s political shadow play, which saw him grab Delhi in the assembly elections of 2015 by a 67-3 margin, is slipping out of his hands and he is desperate for political survival.

The offer of free travel to women commuters is intrinsically flawed in nature, financially unviable and goes against the principles of gender equality. The only benchmark it qualifies is political stratagem.

With a total budget of Rs 60.000 crore, the state budget has a fiscal deficit of Rs 5,902 crore, an increase of Rs 5,213 crore as compared to the revised estimate of 2018-19.The viability for such freebies can be judged from the enormity of the financial deficit.

Not only Delhi’s financial health is in doldrums, Delhi Metro incurred a loss of Rs 144.98 crore during the year, as per Director’s Report 2017-18, available on its website. Also, add the amount of interest to be paid to JICA (Japan International Cooperation Agency) loan. As on bygone financial year, the total JICA loan stood at Rs 29,488.09 crores.

The pertinent question that comes even to a layman’s mind is genuineness of the proposal of Kejriwal. Ownership of Delhi Metro is 50% each between Delhi government and Centre Government and any unilateral step by any of them could make the issue contentious.

The only expenditure which Kejriwal and his coterie find unavoidable is the amounts spent on self-promotion–publicity and advertisements.  In his first year in office, Kejriwal government spent Rs 59.9 crore on advertisements, Rs 66.3 crore the next year and Rs 85.3 crore up to December 31, 2017, as disclosed by the Directorate of Information and Publicity (DIP) in a reply to an RTI application by IANS.

The Congress’ average was Rs 17.4 crore in the last five years of its rule (2008-2013). The AAP government’s spending on advertisements increased by about 300% compared to the Congress government, said the RTI reply. A 2017 Comptroller and Auditor General (CAG) report found that the Delhi government had spent 86% of the total budget for its media campaign celebrating the completion of AAP’s one year in power in 2016. Delhi Congress President Ajay Maken said: “They (AAP) are using the power of advertisements to put pressure on TV (channels) and newspapers. They are doing it ruthlessly”. BJP MLA and Delhi Assembly Leader of Opposition Vijender Gupta termed the government’s spending on advertisements as “irrational”. “Misuse of public money in this way is completely unjustified and unethical,” Gupta told IANS.

The AAP party had set aside Rs 257 crore for information and publicity in the 2018-19 budget tabled in the assembly today, an increase of nearly 29 per cent compared to the previous budget.

With such a penchant in self-promotion and self-publicity, AAP declaring free rides to women commuters and free ‘Bijli-Paani’ to Delhites is a financial baggage his government can’t afford.

The ingenuity of the AAP leader can be assessed by the very fact that this offer is limited to women travellers only and not to, say, those who are physically challenged.

Kejriwal is known to make fake promises. There were many such when he first assumed reins of Delhi in 2015. There were promises to audit electricity companies, jan lokpal, free wifi, 20 new colleges, 500 schools, 700 litres of free water per day, large number of home guards for women security, swaraj bill, cameras installed on Delhi streets, improvements of sports facilities, etc. All of them remained just on paper. Going by how women travelers have reacted to Kejri’s free offer of metro ride on social media, it seems nobody is taking his offer seriously.