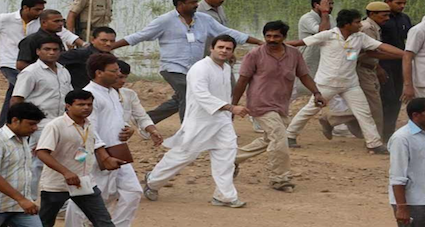 Rahul Gandhi’s padyatra could be the puff of life for a comatose Congress party.

It could freeze G-23 dissidents; sink opposition unity if without the Grand Old Party; engages BJP in its own game of people-connect; and make Gandhis a player again, to live another day.

For five long months—over 3,570km and 12 states—the Gandhi scion would be on road, surely not short on kurta-pyjamas or sneakers or the food of his choice. And don’t you take the word “container” literally for it would be plush to spread out his tired limbs and throbbing feet when the dusk settles into night.

The best of copywriters would ensure he has something to say or do which would make national headlines daily though I think that’s superfluous for a servile media would dedicate itself anyway in a promotional blitz which would evoke sympathy and admiration in equal measure almost every day.

This event is made for media, to keep Gandhi in the spotlight, an image makeover for the man who is being dismissed by even his own as a “non-serious individual” and who has shown no sign of measuring up to the formidable Narendra Modi in the last eight years.

It’s a significant break for Gandhi who has preferred to live in his own bubble; in his echo-chamber where his pets and Press lionize him and tell him what he wants to hear or see: Anything but the truth.

It’s just not Gandhis. The entire eco-system built around them — media, academicians, bureaucrats and judiciary, Islamo-Christian forces etc—need them as vehicles to keep India unstable. Mamata Banerjee and Arvind Kejriwal, in comparison, are sideshows.

If 2024 comes a cropper, three General Elections in a row, Congress would break up. Sonia Gandhi is past her shelf life; Priyanka Gandhi is a band-aid at best and so Rahul Gandhi must count.

BJP, in last few weeks, has changed gears. They no longer treat Trinamool Congress (TMC), Aam Aadmi Party (AAP), a Thackeray or Soren with kid gloves which hide the iron hand. Gandhis too have the heat of Enforcement Directorate (ED). If Madhya Pradesh, Rajasthan, Karnataka or even Jammu & Kashmir are a cropper at polls next year, Gandhis would’ve wolves woofing in their ears.

The Padyatra, if negotiated well, would put all previous ones to shade. Mahatma Gandhi’s Dandi March of 388-km in 1930 was symbolic for which his memory reaps a reward to this day; Chandra Shekhar’s 4260 km in 1983 was a good political capital which ensconced him into the PM’s chair in 1990; and Digvijaya Singh’s 3300km in 2017-18 turned him into a kingmaker in short-lived Kamal Nath’s government in Madhya Pradesh. The father and son duo of Reddys —YS Rajshekhara and YS Jaganmohan Reddy — too were not the worse for the padyatras they did.

This is the last roll of the dice for Gandhis. It has little to do with “Bharat Jodo” and more for selves which ride on the carriage-wagon of Congress, coming apart from the wheels. The welt and blisters; an aching, bruised, inflamed and hurting body is a far better option than political death staring in the face.

The last thing BJP should do is to mock the padyatra for this is not something to laugh at. It would be akin to repeating the stupidity of Rahul Gandhi who was derisive on “chowkidar” and crass in drumming against Rafale. One, it would thrust him as Face of Opposition presently mired in personal ambitions. Two, it’s likely to influence the fence-sitters along with the captive Muslim vote. Three, BJP would only be dragged into a matrix which is best left untouched.

Padyatras or Rathyatras, Indians always have a soft spot for a biggie who knocks at their crumbling doors. It almost becomes an identity for them and their next generations—“He was here”!. It always has political dividends. The challenge would be the Year After for that leads up to General Elections. Now that Rahul Gandhi has chosen to ride a tiger, he can’t afford to get off the beast.

We would see if Rahul Gandhi finally has his skin in the game and it is not just another stunt. It would require a change in his genetical make-up—and that is a much longer trek than a few thousand kilometres walked.