Mamata dials Dhankhar: But who is Salim Khan and what really happened at Booth No. 7? 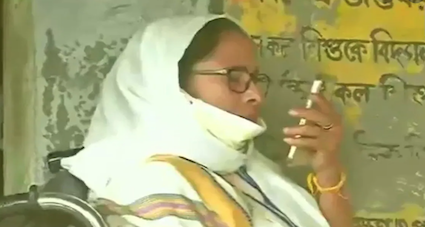 Dhankhar, called names, accused of parroting BJP lines and once even denied entry into Calcutta University, has only been snubbed and viled by Trinamool Congress during his tenure. Now it was he who was being sought out from the other side.

Mamata called up Dhankar claiming that there is complete breakdown of law and order in Nandigram having visited the constituency on a day of high drama.

The governor assured the issues raised by her would be looked into by those concerned.

“Issues flagged Mamata Banerjee a while ago on phone have been imparted to the concerned. There is full assurance of the concerned to adherence to rule of law. Am confident all will act in right spirit and earnestness so that democracy flourishes,” the West Bengal governor said from his official Twitter handle.

His remarks came after Banerjee called Dhankar over phone from Nandigram and said that anything might happen at any moment.

The flow of events, as per my sources, and ground reporting, happened thus:

At Nandigram, Mamata Banerjee sat inside Booth No. 7 alleging against CRPF to have created obstacles for local voters while helping outsider voters.

It was a very serious allegation which drew the due attention of all constitutional entities including Dhankhar along with the Election Commission.

Media was around when Mamata was speaking to Election Commission observers, following which she left Booth No. 7.

The channel showed when Mamata Banerjee was leaving Booth No 7, a Trinamool Congress supporter Salim Khan spoke to Mukhopadhya and claimed to be a voter of that booth who couldn’t cast his vote, adding his vote had already been cast.

Now came the twist in the tale: When voters’ list of Booth No. 7 at Boyal Maktab Prathamik Vidyalaya was checked, it showed no voter named Salim Khan in that constituency!!!

So the question is: (a) Was Mamata Banerjee misinformed by her own people at Nandigram? (b) Are her own people sabotaging from within? (c) Who is this Salim Khan character? All these questions of course are based on the assumption that Banerjee herself didn’t try to mislead the people, media and due constitutional bodies.

Besides, her presence at Booth No. 7 delayed the election process by 2 hours which is a violation of the Model Code of Conduct.

As per NDTV, Mamata Banerjee has explained her overstay at Booth NO. 7 thus: Once she reached the booth in Boyal, the villagers suddenly began shouting “Jai Shri Ram” slogans. They were confronted by Trinamool supporters. Stuck between two hostile groups, the chief minister had to stay inside a room of the counting booth.

Outside, the security forces were caught on camera shuttling between the two slogan-shouting groups who faced each other across a field before restoring peace.

Mamata, on her call to the Governor, alleged: “People from other states are creating ruckus in Nandigram and I have lodged 63 poll-related complaints since morning, but no action has been taken by the Election Commission.”

While on phone with Dhankar, the Trinamool Congress leader alleged that people who are raising slogans are outsiders and they have came from Bihar and Uttar Pradesh.

#WATCH: West Bengal CM Mamata Banerjee speaks to Governor Jagdeep Dhankhar over the phone at a polling booth in Nandigram. She says, “…They didn’t allow the local people to cast their vote. From morning I am campaigning…Now I am appealing to you, please see…” pic.twitter.com/mjsNQx38BB

Earlier in the day, Trinamool Congress Rajya Sabha MP and party spokesperson Derek O’Brien said, “BJP and their mind games! Won’t work. .. All attempts by CRPF to influence or intimidate voters not working.”

In the morning, Trinamool Congress Lok Sabha MP Mohua Moitra in a tweet said, “More than 150 EVM machines malfunctioning since Phase II voting started this morning. Wish Election Commission had put half as much effort into ensuring no EVM glitches as it did into transferring police officials.”

Voting for 30 assembly constituencies is in progress in West Bengal, including Nandigram, at the time of this report. Adhikari has claimed that by the time polling ends for the day there will be over 80 per cent votes cast, given the serpentine queues that started since 5 a.m., two hours ahead of the polling began.

More than 75 lakh voters will cast their votes in 30 assembly constituencies spread across Purba Medinipur, Paschim Medinipur, South 24 Parganas and Bankura. The TMC and BJP have fielded their candidates in all the 30 Assembly seats, while the Communist Party of India (Marxist) has fielded 15. The alliance partners of Left – Sanjukta Morcha, the Congress and ISF – are trying their luck in 13 and two seats respectively.

The polling was peaceful in Assam as a significant number of voters turned up to exercise their franchise in the 39 seats going to polls in the second phase of the Assam election 2021.

According to the Election Commission of India, 73.03 per cent and 80.43 per cent voter turnout was recorded till 6 pm in Assam and West Bengal, respectively.