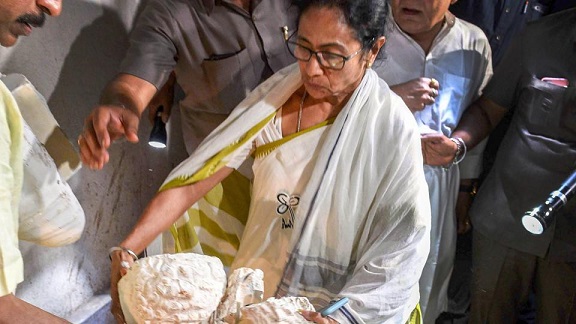 Trinamool Congress Chief Mamata Banerjee, apparently losing her sanity ever since the results of 2019 polls were declared, is seeking to counter Bharatiya Janata Party (BJP) and the Hindu consolidation behind it by deciding to raise a number  of statutes of Bengal’s icons of yesteryears.

Turned into a ‘Statue’ herself, the garrulous Mamata Banerjee is not only at a loss of words but also loss of strategies. A known follower of ‘Muslim appeasement policy’, she stumbled upon Newton’s Third law to discover that her appeasement led to the consolidation of majority Hindu votes.

In comes the strategy of “statues.”  After the vandalizing of  statue of Sri Ishwar Chander Vidyasagar on May 14 while the elections were still on, Mamata is trying to work on the pride of Bengalis. TMC is now seeking a refuge behind the statues in a bid to revive the Bengali pride.

Installation of statue of Rabindranath Tagore at the entrance of Presidency College is being planned. TMC has decided to move the bust of Sir Ashutosh Mookerjee from the Centenary Hall of Calcutta University to a ‘better’ place where it gets viewed by more people. State Education minister Partha Chatterjee said, “ Artists are being selected for replacing the bust of Ishwar Chandra Vidyasagar…a new statue of Bengal’s renaissance icon will be installed at the Vidyasagar college.” Mr. Chatterjee said there were plans of installing statues of Raja Ram Mohan Roy and poet Kazi Nazrul Islam in the College Street area.

As this statue installation spree was not enough, many of the TMC leaders including the Chief Minister Mamata Banerjee have changed their profile pictures on Twitter and Facebook. Display picture (DP) with photo of Ishwar Chandra Vidyasagar is placed on their profiles. TMC leader and Rajya Sabha member Derek O’ Brien  too has done so and so has Mamata Banerjee.

Mamata Banerjee’s twitter carries an image of Ma Durga too–a bid to bury the Durga celebrations-Muharram controversy, when she gave preference to Muharram celebrations and delayed Durga “visarjan.” It’s fooling no one though since Mamata has ordered the arrest of 10 persons for chanting “Jai Shri Ram” while her convoy was moving on the streets of Kolkata.