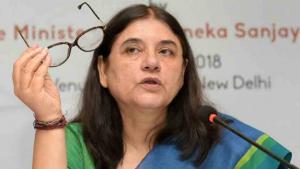 Maneka Gandhi, Union minister for Women and Child Development, ignited a controversy when she addressed a Muslim gathering in her constituency, almost warning  them to cast their franchise in her favour  or else it would be difficult for her to stand up for them after the elections of which she is sure of winning.

The Election Commission immediately took cognizance of the matter and Sultanpur District magistrate served a show-cause notice and a report has been sent to poll watchdog, ANI reported.

“I am winning, but if my victory is without Muslims, I will not feel good, because then there is bitter feeling. If Muslims come for some work after that, I will think, ‘what difference it makes’. Because employment is a negotiation, after all, Isn’t it? We are not Mahatma Gandhi’s children to keep giving without  getting anything in return. I am extending my hand for friendship. You can ask anyone in my former constituency, Pilibhit, about my work. I have already won this election. The rest is upto you,” she said while addressing a Muslim dominated crowd in village Turab Khani in Sultanpur constituency. She further said, “This is your chance to lay foundation.  When the election comes and this booth throws up 100 or 50 votes, and then you come to me for work we will see..do you understand…”

With video of this speech going viral in almost virtual real-time, the political storm on social media as well as from opposition parties was not long in coming.

However, Maneka Gandhi later said that her remarks were quoted out of context. She claimed that the video clip is the mischief of a private channel, though she did not name the channel. She said she was addressing the meeting to the Muslims of the party’s minority cell and it was like a general conversation with the people there.

Notwithstanding the counter claims made by the Union Minister, BJP has yet to react to it. It hasn’t issued a statement to condemn her speech. The audacity with which Maneka Gandhi distanced her political class from Mahatma Gandhi is difficult to comprehend.

A cynic could even suggest that this could be Maneka Gandhi’s way of getting even with the top brass of BJP, and alienating Muslim votes altogether, for she hardly is given prominence despite being a Union Minister.

Maneka Gandhi is contesting from Sultanpur, a seat won by her son Varun Gandhi in 2014. Varun Gandhi is contesting from Pilibhit, from where his mother had won in 2014 (indeed, she has been a six-time MP from Pilibhit). But the thought behind this aggressive approach adopted by Maneka Gandhi is perplexing as Sultanpur constituency has a Hindu population of 82%, as per 2011 census, and Muslims are not as big a factor.