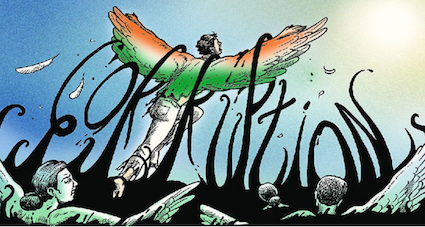 It’s a common belief that West Bengal has a sizeable black economy. The next natural deduction is its’ patronage by Powers-that-be. And that these Powers use the arm of the government—bureaucracy, cops etc—as a conduit.

Against the norms, however, West Bengal chief minister Mamata Banerjee refused to release these officers from the State duty and appealed to Supreme Court against MHA’s call. It squarely brought the focus on these three cops: What was it that made them special?

People in know remember the case of Punam Kumari Das alias Guria’s missing case. The minor Dalit girl had been missing since June 10, 2017 (FIR No.132 dated 10/06/17 of Garden Reach PS under section 363 of IPC). She was the daughter of one Vinod Das, a poor conservancy staff of the Kolkata Corporation. Eight months later, Kolkata Police admitted in Calcutta High Court on February 16, 2018 that they were incapable to rescue Guria for it was impossible for them to raid Metiaburz, an assembly constituency in South 24 Parganas! Neither Judiciary nor Human Rights noise was of any help.

It was natural that there would be a swirl of storm on Social Media. It was now that Joint Commissioner (Crime), Praveen Tripathi, stepped up on behalf of Kolkata Police to gag public dissent. On April 17, 2018, Tripathi tweeted: “A false rumour being spread on social media about a missing minor girl held captive in a Metiaburz house and police being afraid of raiding house. Don’t believe in rumours being spread to create communal tension. All indulging in spreading rumour would be severely dealt with.”

A false rumour being spread on social media about a missing minor girl held captive in a Metiabruz house and police being afraid of raiding house.Don’t believe in rumours being spread to create communal tension. All indulged in spreading rumour wud be severely dealt with.

I am sure readers would recall several instances when public dissent has been met with an iron fist. Cellphones confiscated, SIM cards torn are instances aplenty. Guria’s was just one such instance. But it led to public outcry and names such as Praveen Tripathi caught attention. It then becomes a matter of connecting dots.

It brings us to Nandigram. This month, BJP complained to Election Commission about the State police intimidating voters and virtually being at the service of Trinamool Congress, the ruling dispensation. BJP also went ahead and named two senior IPS officers, namely, Vivek Sahay and Gyanwant Singh, as ones orchestrating mischief. They added it was the State Police in civil dress, on Trinamool Congress’ calling and threatening people with dire consequences if they voted “elsewhere.”

Now allow me to bring more on Gyanwant Singh. He is the same officer who was named by West Bengal governor Jagdeep Dhankhar, no less,  The governor was dismayed at Gyanwant’s promotion after chargesheet was issued to him. (It would do you no harm readers to go through the twitter thread of Honourable Governor below.

ACS @HomeBengal directed to make available the entire file relating to the enquiry of Shri Gyanwant Singh IPS, ADG (Law & Order) @MamataOfficial & promotions effected in his favour after charge sheet was issued to him in view of the findings of the Hon’ble Calcutta High Court. pic.twitter.com/8cC9ILKcTu

On February 26, less than a month back, CBI raided multiple properties of a Kolkata businessman in connection to infamous Coal Scam. CBI sources informed ANI that many bureaucrats and politicians allegedly received mind-boggling bribes through this businessman. One bureaucrat, a “Babu” as is called in common parlance, is allegedly one of the core beneficiaries of Coal Scam in Bengal. He is said to be custodian of controlling string of the entire ecosystem. After Babul Supriyo became MP from Asansol, people expected him to crack the code of this bureaucrat. But the Asansol MP wasn’t able to outsmart him. This bureaucrat is known to have amassed astronomical wealth sufficient for next few generations of his family. However, extraordinary merit and stupendous bureaucratic expertise makes him a deep water fish. Bengal hardly finds this Babu addressing the media or signing government notifications. Without coming to the fore, he regularly supplies cerebral inputs that apparently helps the ruling party but are caustic to the well-being of the State of West Bengal.

Not many are aware that Border Security Force does not have authority to take penal action against trans-border criminals and/or infiltrators. Limit of BSF’s duty lies in either preventing criminals’ entry from across the border or arresting them to hand over to State Police. But local police in West Bengal, since the Left Front’s regime, is accused of first securing the custody of such criminals and then letting them go scot-free. It’s also a fair bet that often BSF might have colluded too in such corrupt practices. Addressing such issues, BSF has recently been commanded by MHA not to arrest criminals only to hand them over to local police. Instead, they have been asked to prevent their entry altogether.

BSF is active these day at West Bengal-Bangladesh border to implement such order. As a result, BSF guys are falling vulnerable to local criminals. Remember a BSF officer, Biswajit Sahani, being thrashed mercilessly by local Trinamool men in Kandi, Murshidabad on December 13, 2020? BSF’s preventive action is infuriating the criminals ecosystem. They are in crosshairs against a formidable opponent.

BJP leader Amit Shah has often stated that Mamata Banerjee has criminalized politics, and politicized administration; that she has institutionalised corruption in West Bengal. The Union home minister knows it best that a parallel crime-economy of Bengal was impossible for Mamata, or CPI-M before her, without active support of police and bureaucrats of Bengal. Babus earlier used to visit Alimuddin Street at CPM party office. During the Mamata era, they have become even more unapologetic. Its sycophancy borne out of immense favour and fortunes they have amassed over the years. Dancing to the tune of ruling party suits Bengal-Bureaucrats because of colossal fortune they have made.

God forbids, what happens if there is a new ruling dispensation in Bengal? If BJP is in seat of power? It sure would make the lives of these Babus a living hell. Only a couple of Babus in the state’s finance department would be answerable for most defalcations of government treasury in the last 10 years once CAG audit begins. No special talent is needed to guess who would Babus prefer. And to what length they would go to ensure the present dispensation in the State remains unchanged.

It’s a familiar fact that Mamata Banerjee is “Didi” not just to citizens but also to Babus and Police of the state. She calls them by their first names even in state administrative meetings. Now a wind is blowing in opposite direction. BJP is busy hanging these officials out to dry. If these blue-eyed Babus and policemen are made “defunct” in the polls, Trinamool would lose a fair bit of its hold. Babus are pillars of Bengal’s feudal rule under the veil of democracy.

While during Left Front regime bribes and crime-economy ran bottom up from ground level—local committee leaders to top brass,  now it’s in the hands of 2-3 bureaucrats. In Mamata’s era, a few top bureaucrats have thus snatched the comprehensive control of whole State administration. Could we forget how Mamata herself sat on a dharna, against a CBI probe, in favour of her blue-eyed then Kolkata police commissioner Rajiv Kumar? Or that governor of West Bengal, Jagdeep Dhankhar has repeatedly putting such issues in pubic domain through his tweets?

Election Commission has removed Bengal’s top cop, DG Virendra. Much as this is a proactive measure, the Babus who have their fingers on the “control-panel” operate deep in the background. The rot is too deep. EC for sure have an enviable task at hand.