Modi in Europe on climate change: Let’s not be sheep who trust the wolves 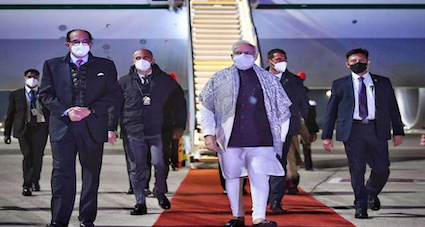 Prime Minister Narendra Modi would be in Glasgow for COP-26 (Conference of Parties) in a few hours on climate change and would be advised not to make any commitment to the discredited West.

This is the West which has stockpiled nearly 10 billion vaccines, many times over than they need, and left the poorer countries of Africa, Latin America and Asia to its own fate. Why commit to such charlatans who have no welfare of world in mind?

US has paid for twice the vaccination of its population; the United Kingdom four times and Canada five times. But for these privileged, and those in China, Russia and India, the vaccination percentage in low-income countries is a mere 0.3%!

The feel-good propagandists would tell you that more than 4 billion vaccine doses have been administered globally. Some 30% of the world’s population has received at least one dose of a vaccine. But they won’t tell that only 1.1% of these fortunates figure in poor countries.

Most haven’t received even one dose as Covid-19 is submerging economies in a deluge of rampant inflation and spiralling unemployment; where oxygen cylinders and concentrators are absent and health infrastructure and medical staff is abysmal. And now that all meagre paramedics are concentrating on Covid-19, who is there to worry about malaria and TB patients with which a continent like Africa abounds in?

Families have been destroyed; crime has hit the roof in the absence of basics and anarchy and civil wars loom. Meanwhile, we have these finely turned out gentlemen and ladies in high heels talking homilies on humanity and world’s welfare.

The G7 last month agreed to donate 1 billion vaccine doses to poor countries—a laughable figure really given that the requirement has shot up to 11 billion doses.

But what else do you expect from this rigged world order when no probe has seriously been done on the origins of Covid-19; when World Health Organization was in a hurry to give a clean-chit to China; and when it gave approval to China’s vaccine within a dozen days even as it has dragged its feet on India’s Covaxin for months now.

Figures tell us that out of every 100 people inoculated, Europe and North America take the fat cut of 84 and 82 doses—Africa is lower than five doses for every 100 people!

Asia (54) does better in comparison but that’s largely because China and India are vaccine-capable. Latin America is 59 doses per 100 persons.

So when our Powers, after 17 months of Covid-19 pandemic, aren’t even debating as to its origins; and whether it could have been a bioweapon; when industries such as aviation have been destroyed with millions of workers laid off; why do we take the West seriously that the whole world would be vaccinated by 2023? Why at all we believe in their pretence of commitment on climate change? Is anybody even discussing how beef etc cause 60% of bad emission?

So I hope our prime minister don’t fall to chicanery of his company in Rome and Glasgow. West doesn’t intend the welfare of common lives but only the fattening of pharma, industries or technological giants. Let’s not be sheep who trust the wolves.