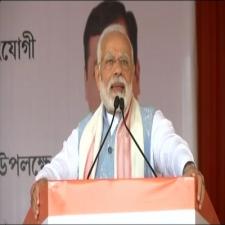 Prime Minister Narendra Modi came down hard on the misinformation on Citizenship (Amendment) Bill, 2016 in a public rally in Amingaon, Assam on Saturday which has been artificially kept alive by the dishonest English media in recent weeks.

Modi made an unusually sharp attack on local media in front of a mammoth crowd—“these reports would not come out tomorrow”—though he could as well have included the national media.

English mainstream media have bewailed in recent weeks about how the Citizenship Bill would cause an influx of fleeing, persecuted minorities from Pakistan, Afghanistan and Bangladesh into Assam and North-East states and destroy the language, identity and demography of these regions. And how BJP’s own allies are up in arms against the Centre.

But there appeared little sign of local unrest as tens of thousands of people poured into the rally and let out a massive uproar after Modi had nailed the drummed up issue of Citizenship Bill in the head.

“I want to speak about the Citizenship Bill. Neither Assam nor North East would suffer because of influx of people (fleeing persecuted minorities). And that’s because no-one can become (Citizen of Assam) without the state government’s due diligence and approval.”

In other words, Centre won’t shoe-in fleeing persecuted minorities into Assam and North East states. Indeed, it would’ve no such role anywhere else in the country too. State governments alone would take a call on the matter.

Predictably, English mainstream media of the Sunday morning have given a slanted view to Modi’s speech. The focus of these newspapers has been on how Modi is sticking to support these fleeing mass of humanity—as if to show him in combat against the local sentiments—instead of highlighting his calming assurance.

“We must make the difference between infiltrators and persecuted Indians. Infiltrators have no place, not just in Assam but anywhere else in India…whereas fleeing minorities have rights over Maa Bharti,” said Modi as he made a distinction between National Register of Citizens (NRC) and Citizenship Bill.

“There’s a pace with Bangladesh now and we are sealing the borders between Bangladesh and India.

“Past government was dodgint to bring the NRC into effect. We have acted under the guidance of Supreme Court and we should complete it on scheduled date (July 31, 2019),” said Modi.

Modi didn’t pull punches in his 40-minute long speech. “It’s been 30-35 years since the Assam Accord. But (there’s been) no sincerity in implementing it.”

Modi made a pointed reference to clause 6 of Assam Accord which envisaged rightful constitutional, legislative and administrative safeguards to protect, preserve and promote the cultural, social, linguistic identity and heritage of the ethnic Assamese and which previous Congress governments made no sincere attempt to fulfill it. In contrast, Modi government now has a committee in place to ensure its implementation.

“Those who sit in air-conditioned offices in Delhi and make noise in the Parliament, they should come and look at this crowd and judge the mood of Assam for themselves.

“Stop playing with emotions of the Assamese people. For vote politics, I will not allow Assam to go to pieces.”

For good measure, Modi pointed out that two illustrious sons of Assam—it’s first Chief Minister Gopinath Bordoloi and poet Bhupen Hazarika—got Bharat Ratna only under the regime of BJP governments. “They (Congress) have neither cared for its (Assam’s) heroes nor for its well-being.”