Modiji, why Indian Muslims are not able to trust BJP 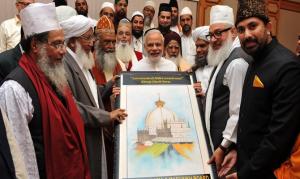 Yes, that’s what ABP News’ Rubika Liyaquat asked the Prime Minister in an interview(54:00):  “Modiji, why Indian Muslims are not able to trust BJP? What is Narendra Modi’s `rishta’ (relationship) with India’s Muslims?”

Simple. Straight. From one of the rising anchors of Indian TV news industry.

“Today when I say there would be no Indian who wouldn’t have a house of brick and mortar by 2022; when I say I have given electricity to each house, then I don’t look at what’s the demography. It’s for everyone.”

There are a few other questions which Indian Muslims have in mind and which Rubika Liyaquat didn’t ask. Questions which my own Muslim friends, who easily outnumber my Hindu friends, haven’t asked me but I sense hold against me and my beliefs. So let me guess the question they would ask and the answers I would give. It’s important for there are millions who are on either side of the divide. Open dialogue improves understanding and India can’t do with just one viewpoint and ideology. It may also make Indian Muslims pause and think before they vote in the Lok Sabha polls this week. So here I go:

From lynchings to restriction on beef, Muslims are on target

I would neither deny nor confirm it. I am not sure if Muslims are not getting beef on their dinner table. As for lynchings, it’s reprehensible. But it’s not as if it didn’t happen before 2014. Or, if Hindus weren’t lynched in last five years. Hindus or stray voices in BJP as a whole can’t be held to account as all Muslims can’t be held to account because of Islamic State (IS). As for BJP, the condemnation came from no less than PM Modi: “Unko mat maro, himmat hai to mujhe maaro (Don’t kill them, if you have the courage, kill me).”

If Indian state uses a strong in hand in Kashmir, it’s not against Muslims—it’s against terrorists. It’s against a communal agenda. No rights of Muslims have been taken away under Modi government which is enshrined in the Constitution.

BJP neither gives tickets to Muslims nor looks after them

Triple Talaq might raise the ire of fundamentalist forces among Indian Muslims but look at the benefit it could accrue to Muslim women and how much it could help the nation. Women, for instance, constitute 45% of United States’ GDP; 39% of China and 34% of Africa.

Contrast this with Congress. It’s a misnomer that Congress gave Muslims a higher representation in Lok Sabha elections. It fielded only 27 Muslim candidates in the 2014 General Elections. Very few Muslims were given tickets even under Jawaharlal Nehru and Indira Gandhi. If today Indian Muslims are backward today, a lot of blame must go to Congress who ruled for most of independent India’s 72 years.

RSS is a known Muslim-baiter

Wrong. Stray comments from former Sangachalaks—which they renounced in double quick time—can’t be held against them. RSS has a Muslim wing—Muslim Rashtriya Manch—which has over 10,000 members. They don’t ask about your religion when you fill the form for RSS membership. They speak about “Akhand Bharat”. They want Indian citizens to respect the “nation” above the narrow binary of “caste and religion.” No gathering in any RSS shakha propagates anti-Muslim agenda.

If Indian Muslims want to know about real persecution, they should look at China: It has banned naming babies as Muhammed; bans fasting during Ramadan; asks hotels to refuse guests from 5 Muslim majority countries; forcibly separate Chinese women married to Pakistani men.

Indian Muslims must also revisit the belief that Congress is their protectors. In last 17 years, no riot has happened in Gujarat. Compare it with the Congress one—or Samajwadi Party’s reigns. Today we have a situation when Rahul Gandhi, while releasing the manifesto of Congress, says: “We are all Hindus.” (Can you believe it! So they have come round to RSS belief: that all born in India are originally Hindus!!!).

It’s time Indian Muslim question Congress as their protectors: Isn’t it Rahul Gandhi, Priyanka Gandhi and Sashi Tharoor who make a show of about being Hindu these days (a bigger song and dance than what BJP says or does, truth to tell). Isn’t Muslim world today has bigger respect for Modi government than it ever had for Congress (remember Sushma Swaraj being a guest speaker in Organization of Islamic Cooperation).  Aren’t the think-tanks of hard-core Muslim states in the Middle East wondering how come India live with such peace and harmony as a nation of multi-religious identities when they themselves—with Quran and Namaaz and all—are tearing themselves asunder?

Isn’t there a need for Indian Muslims to assuage the hurt of the majority on Ram Mandir issue? A disgust when a bearded Imam publicly announces Rs 25 lakh cash for shaving the PM’s head? Or when a film star names his son as Taimur whose name is associated with the butchery of the most savage kind. Would they pause and admit that majority Hindus have a reason to be unhappy on these counts?

Let’s be honest. Hindus today are becoming conscious of their identity. I am one of them. I don’t want to be apologetic if I feel great about my Krishna or Rama; or if I am hurt to know that Aurangzeb broke the Kashi Vishwanath temple of Varanasi and made a Gyan Vapi Mosque in its place. Or as is the case with Babar and his Babri Masjid. If I am conscious of my identity, it doesn’t make me anti-Muslim. As a journalist and author, if I write about the Islamic atrocities India has suffered, the destruction, rapine, and massacres they have caused, the false narratives of “gangajamuni tehzeb” which fake historians and fake media have built, I am not being against my Indian Muslim brethren. My Muslim friends may view it as fanning the fire of polarization; I view it as course correction in India’s history and its’ present discourse. And it’s time our next generation are made aware of our true past to protect the present and future. Indeed, Indian Muslims should welcome such a quest from seeker Hindus. It’s their land and their history as well.

A Naseeruddin Shah, Aamir Khan, Javed Akhtar or a Kamal Haasan are wrong when they worry about Muslims in India. It’s in the gene of Indians to respect men and women of other faith. A few stray incidents don’t define the majority. If anything, Indian Muslims must take to task the fake politicians and fake Lutyens media. They are not your friends; they would never be. All these monsters seek is blood and violence to further their vote banks and pockets. Indian Muslims have an option to choose corrupt, anti-people government—or go for one which is honest and progressive and hold a mirror to better India. In turn, they would be a model to those who feel Muslims can’t rise above their religious identity.