Murthal is one of many “fake news”: But who cares? 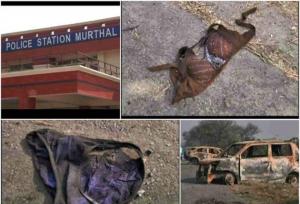 The kind of furore and din media created on “Murthal gangrape” during the Jat Stir in Haryana is beginning to unravel. The rape which never happened was actually committed in Indian media newsrooms and TV sets. There were dramatic recreations of the “gangrape” in order to drum the outrage in gullible audience mind. The exercise was meant to establish how much the communal struggle in Haryana has turned into hatred and viciousness.

But would it make any difference after this fraud is now exposed?  This is the same media which had assaulted our senses with all its fury in its defense of those who were advocating “terrorism and secession” inside the Jawaharlal Nehru campus. So much so that those who were showing the truth, were viciously attacked by a Print-TV media gang. After the Central Forensic Science Laboratory (CFSL) proved beyond a shadow of doubt that the JNU footage was genuine, the entire discourse was swiftly swept under the carpet—as if no such outrage had ever happened!!!

A few days later, a person in Mumbai alleged that because of a leather bag in his possession, a few cow vigilantes had misbehaved and roughed him up. And that the auto rickshaw driver actually de-boarded him from his vehicle. The entire matter was dutifully also turned into a police complaint. Now all hell broke loose. The bogey of “intolerance” was whipped up in our newspapers and TV studios.

Only, when the news was shown to be false and the “outraged” person confessed that he had made up the story at the behest of a few members of a certain political party, the media fell silent and didn’t have the decency to apologize for the blather it had indulged in for two full days.

Then there was that “fake news” of a Dalit home being put to fire in Sonepad in Haryana; and of a few girls in Rohtak who had beaten a few eve-teasers black and blue. After these news were found to have holes, these print and TV channels disappeared without a trace. Nobody came forward to own up its guilt.

The same was the “fake news” of a Muslim girl not being given a flat on rent in Mumbai. These are a few reports in our mainstream newspapers such as Hindustan Times, Times of India, Indian Express and The Hindu. However when the report of religious discrimination was found to be untrue, there was no apology forthcoming from either the newspapers of TV news stations. No questions were asked as to why an attempt was made to give the incident a religious colour.

The one great silver lining of this “Murthal Gangrape” concocted story is that despite this effort to create communal tension, unrest and violence, the people of Haryana neither believed it nor allowed the distrust to grow between different communities.

Now that amicus curiae has clearly said it in the court that after an Special Investigative Team (SIT) investigation, the “Muruthal gangrape” story has been found to be untrue and that this journalist must be persecuted, it remains to be seen how our venerable media would now react.

But let me second guess it for you—the matter would again be given a quick burial. Truth is something, you see, which media doesn’t allow to take roots in its curated backyards.