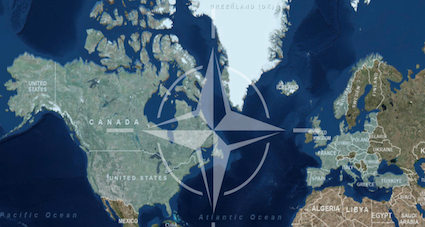 From its inception in April 1949, NATO been termed as a “defensive” alliance.

The Article 5 of its charter ask all members to come to the aid of a member state who has been attacked.

Now tell me, what danger the United States has from being attacked by its neighbours; run the whole gamut if you must of Cuba, Venezuela, Nicaragua etc.

And what “defensive alliance” has been the reasons in bombings from Europe to Middle East to Asia to Africa in the last 30 years?

If the world wanted NATO, as the West makes it sound an ethical burden, 85% of it, or 6.7 billion people, wouldn’t have refused the call for sanctions against Russia.

The United States and Europe wanted the world to close their airspace to Russian planes: 88% refused.

Russia couldn’t be stopped from attending the G20 meeting in Indonesia.

So the world which NATO wants to protect, doesn’t see Russia, or China, as a threat.

Zelensky moved heavens for a chance to address the African Union. After several tries, he was allowed his address on June 20 — but there were only 2 heads of states in the room out of 55 nations.

Cut to annual NATO meeting in Madrid in June. NATO declared Russia as the “most significant and pressing danger” and China as “a threat to our interests.”

While inviting Finland and Sweden to join the “defensive alliance”, NATO also declared Russia as a “threat” to our “southern neighbours.”

But clearly, as I have shown, the “southern neighbours” don’t see Russia as a threat at all.

This global authority which NATO tom-toms was acquired after it dropped the hand-crafted atom bombs over Hiroshima and Nagasaki in 1945.

Europe scurried under the US umbrella which could station its troops in the Old Continent. This advantage of a few years over the USSR in nuclear capability lasted them in good stead till the Soviet Union exploded in 1990s.

It was a seminal moment for the West to give up on NATO if it wanted the welfare of the world and humanity.

There was simply no threat for NATO and its “defensive alliance.”

But no, the machismo of NATO was soon bombing Serbia and breaking-up Yugoslavia; reducing Iraq, Afghanistan, Libya etc into debris; an unending cycle of death and devastation, uprooting millions, turning thousands into refugees, children and girls being killed or raped.

And guess who is out of the UN Human Rights Council: Russia of course.

Meanwhile NATO, all the time, is encircling Russia and China with its military bases—Poland, Estonia and Latvia can nuke critical Russian targets in a matter of minutes.

Thanks to NATO of course.

And don’t you think NATO fights only with boots on the ground. It has patented the hybrid strategy: stoking unrest in far-off countries on some issue or other through its agents who pose as NGOs and Human Rights activists; amplifying it with servile media and the social media giants. Soon the system collapses, the law and enforcement agencies are left frozen and a coup occurs.

A new government and the military industry, on which the US thrives, is in business.

This model has umpteen examples across the world and readers only have to search for evidence to find a pattern.

But then Ukraine happened.

Russia actually put boots on the ground; indulged in a conventional war, and this hybrid strategy of NATO went for a toss.

NATO is endlessly supplying weapons to Kiev with till-the-last-Ukrainian-standing goal but its’ not the same as hybrid war.

Millions of Ukrainians put to misery.

The truth is NATO stands only for the United States. Period.

And it’s the people of West who could do it.

I hope they see through this chimera o democracy, human rights, blah-blah.

That alone could save them. Us. The  whole humanity.