NDTV and a prophetic Ravish Kumar 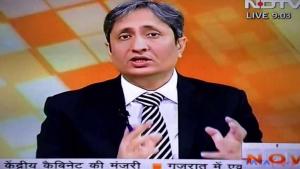 “This blank screen is the real face of television today.”

During the Jawaharlal Nehru University-Kanhaiya episode, Ravish Kumar of New Delhi Television (NDTV) had made this pompous remark. We all remember how the supporters of Aam Aadmi Party (AAP) went to town on this and created a ruckus on social media.  None of us had probably foreseen that the joke would be on NDTV soon enough. That the TV channel would be asked to keep its screen blank for a day.

For leaking sensitive information on Pathankot attack, an Information and Broadcasting (I & B) ministerial committee has recommended that the channel be asked to stop its telecast for a day as a mark of punishment.

Truth to tell, this “black-out” isn’t just on NDTV, it’s on entire Indian media. This media indeed opposes any kind of censorship but in the name of freedom of expression makes little allowance for the paramount safety and security of the nation in which they operate.

Of course this is not Emergency. Newspapers will publish as they do daily. News channels would beam in your drawing room as they always do. Still this measure on NDTV would be likened to Emergency Revisited.

We all know what the Indian National Congress, from Indira Gandhi to Manmohan Singh regime, did. Indira declared Emergency. The Manmohan Singh government, on the prompt of a coal-scam-tainted Naveen Jindal, lost little time in putting editors behind the bars. This was the same government which did hear the Nira Radia tapes but took little action.  These tapes allegedly had NDTV editors boasting in recorded audio of their pervasive influence in interfering in the then central government’s decisions. We all know no action took place.

In case you don’t know, NDTV is being investigated on its funding.  Like the “black out,” if the investigations in financial irregularity do yield some incriminating evidence and any action follows, then again all hell would break loose on the central government’s perceived animosity against a media channel. Never mind, like any corporate entity, if irregularity happens and it falls beyond the scope of its Memorandum of Association (MOA) under the company act, a media channel too is liable for persecution.

I don’t go by NDTV’s logic that they weren’t alone who had aired the “sensitive” information on Pathankot attack. I also personally don’t agree with the recommendation to stop NDTV for a day. They could’ve been warned or asked to apologize.

From Modi the Chief Minister of Gujarat to Modi the Prime Minister of India, NDTV’s “Modi-affliction” is well-known.  Modi might or might not have known the recommendation of this inter-ministerial committee beforehand but the hawks will present it as a proof of government’s antipathy; an assault on media’s freedom; and a sort of “medal” for the channel.