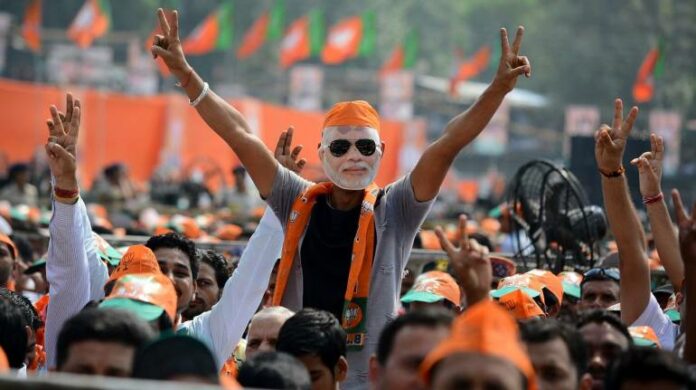 Though all Exit Polls point towards the return of Narendra Modi as prime minister again, some widely differing forecasts have caught eye of the people.

ABP Nielsen has predicted a mere 22 seats for NDA from Uttar Pradesh. GVL Narasimha Rao, BJP spokesperson and a renowned psephologist in his own rights, chided ABP on its own channel: “The polling agency which you have entrusted the polling job with, have some problems with their methodology. During UP assembly polls too, your channel projected 118 seats for NDA while we won 324 seats.”

West Bengal is being seen from different prisms by the Exit Pollsters. Out of 42 seats from the state, India TV gives 12 to BJP; Aaj Tak between 19-28; India Today 23. Trinamool Congress chief Mamata Banerjee, “JihadiDidi to liberals, has lost little time in lambasting these projections. “I do not believe these Exit Poll rumours.”

The North-East, where the elections were held on the issue of National Citizenship Registry, despite vicious propaganda of Lutyens Media, BJP is predicted to win 18 out of 25 seats. While 10 to 12 seats are projected in Assam, it is projected to win, Arunachal Pradesh, Tripura and Manipur. Congress is expected to keep Nagaland and Mizoram.

Karnataka is another state where Exit Polls are agreeing for a hearty showing of BJP. NDTV favours 19 for BJP; Aaj Tak 25 and ABP-Neilsen, as usual, on the lower site: 15 for BJP. Tamil Nadu and Kerala are predicted to fall in Congress’ lap. Andhra Pradesh and Telangana aren’t predicted to bring happy tidings for BJP. Times Now and India Today-Axis rate Jagan Reddy’s YSRCP in comparison to Chandrababu Naidu’s TDP at 18-7. Republic, in contrast, favours TDP.

The Hindi belt, from Haryana to Jharkhand remains with NDA with marginal losses as compared to 2014 Lok Sabha polls. In Maharashtra, everyone sees a saffron surge for BJP-Shiv Sena alliance.  India Today gives 42 out of 48 to the alliance; News X 36 and Times Now at 38 seats.

The state of Punjab, where daggers are now drawn between Chief Minister Amrinder Singh and motor-mouth Navjot Singh Sidhu, the exit polls predict a straight  win for Congress with almost all polls agreeing to around 8 seats for Congress and 4 for NDA.

Aam Aadmi Party, everyone agrees, is in for a drubbing. Nowhere the four seats it snatched in 2014. Delhi is predicted to draw a blank for the Kejriwal’s  AAP. For the time being, it seems end of the road for AAP.