One Nation, One Poll: Why Maya, Akhilesh or Owaisi dread it 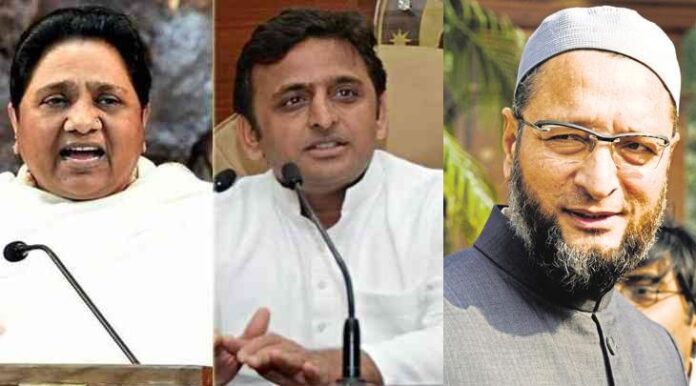 If you were to ask the majority of this country if they want “One Nation, One Poll” the answer would be an overwhelming yes.

People might not have the figures–Rs 6,000 crores on exchequer alone in recent Lok Sabha Polls and many times more by parties and candidates; Or  the numbers on manpower—one assembly seat in Lucknow alone has over 300 polling booths and engages 2000 men on polling day; Or the imagination to guess how many lakhs of police, para-military forces, bureaucracy are pressed into service. Yet, they can sense a gap in their daily lives like a drawn tooth.

The erudites amongst us offer debating points we exhale in the musty air of a bar amidst gathered gentry. So Akhilesh Mishra tells us in Indian Express how it affects Rajya Sabha; how parties can make outlandish promises (Like Arvind Kejriwal on free Metro for women); how at least 15 state elections anyway fall more within a year either side of a Lok Sabha poll.

So what’s the problem?

The likes of Congress, TMC, BSP, SP, AAP, DMK, RJD, AIMIM etc sure have a problem for they stayed away from the all-party meeting Prime Minister Narendra Modi called upon on Wednesday. They saw it as an attack on the Constitution, the “federal” character of our set-up; and blurring the local and national issues which could affect a voter’s judgment.

All this is humbug. Indian voters know how to choose in a state or in a Lok Sabha elections. Constitution is for people of India and any measure which is good for them, must come into force. Such Constitutional changes could be made between ad breaks on television. IT TAKES NOTHING. As for the scaremongering on President’s Rule by stealth; what-if-government-in-Centre falls, these are easily fixable issues: E.g get the no-confidence-motion out of the way at the start of a new Parliament. And if I may ask how it has helped democracy when sworn enemies—Congress and JD (S)—joined hands only to usurp Karnataka last year?

The reason likes of BSP or SP, Congress or RJD, TMC or DMK or AIMIM don’t want “One Nation, One Poll” is caste and religion. With national issues delinked, the ones of dalits vs suvarans (upper caste); Muslims vs Hindus; Tamil or Bengali asmita easily gain currency. Narrow parochial issues keep these parties relevant. The faces of Mayawati, Akhilesh Yadav and Asaduddin Owaisi remain in circulation. The nation loses its steam on the tracks of targeted growth.

Just recall the incidents or speeches which happen around state polls. In Delhi, it was fake attack on churches in 2015, Una incident in Gujarat, Bheema Koregaon in Maharashtra: All were intended to sharpen the caste and religious divide. “Ramzaade” vs “haraamzaade” speeches surface. Quota politics come into play. What room is there left to discuss developmental issues threadbare?

In a paper to Niti Aayog last year, Bibek Debroy and Kishore Desai offered an easy way out to the cacophony of whether state assemblies could be dramatically reduced or enlarged so as it coincides with the Lok Sabha polls. They pointed out that 15 state elections anyway fall in and around Lok Sabha dates.  The remaining states could be bunched together around the mid-way mark of a Lok Sabha term. So, one Lok Sabha elections and two for state assemblies in a span of five years, is the way forward.

It’s not to say the road ahead is easy. For, there is also this matter of panchayat elections and its 30 lakh representatives. The matter of getting all political parties aboard.

But then so was the issue with GST. It’s a reality now. There are examples galore around the world where simultaneous elections are held, including in US where a voter not only chooses his President but also 20 different representatives on a single ballot. Sweden has one election and so is the case with South Africa.

The fact is, in early years of Republic of India, elections were held simultaneously in 1951, 1957, 1962 and 1967. It fell into abeyance because assemblies began getting dissolved due to Centre’s interference. The dissolution of Lok Sabha in 1970 was the final nail which broke up the elections in India.