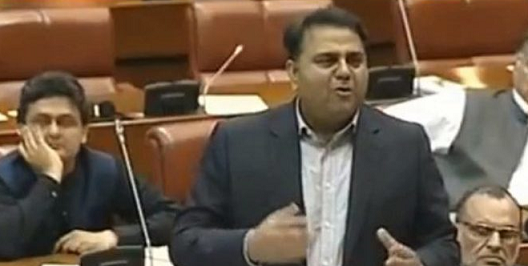 It’s a damning admission of the country’s role in sponsoring cross-border terrorism.

“Humne Hindustan Ko Ghus ke Maara (We hit India in their own home). Our success in Pulwama, is a success of the people under the leadership of Imran Khan. You and us are all part of that success,” Fawad Chaudhury, a minister, said in the national assembly. He is current minister of science and technology.

The responsibility of Pulwama attack was claimed by the Pakistan-based Islamist militant group Jaish-e-Mohammed. With this admission by a minister of the ruling Imran Khan government, it’s also clear that terrorist networks by different names actually operate or are creation of Pakistan’s establishment, run by its army.

As the statement sparked an uproar, Fawad changed his track, stating “When we hit India in their home after the incident at Pulwama.”

Fawad had spilled the beans amidst a debate over opposition leader Ayaz Sadiq’s disclosure about a meeting between foreign minister Shah Mahmood Qureshi and army chief General Qamar Javed Bajwa after Indian wing commander Abhinandan had been captured during the Balakot strike, India’s response to Pulwama.

During a debate in the National Assembly on Monday, Ayaz Sadiq, leader of the Pakistan Muslim League (N) revealed that the Pakistan establishment was afraid if captured Indian wing commander Abhinandan was not released India would attack Pakistan without much delay.

The latest admission by Pakistan government would leave Imran Khan and his men nowhere to hide. Its own minister has now owned up Pulwama attack. It’s an admission that Pakistan sponsors cross-border terrorism which it denies on all political forums, local or global. It also busts the myth that it was international pressure which made Imran Khan agree to release Abhinandan. Indian Liberals had gone to town, gushing on the magnanimity of Imran. Indian Opposition was even claiming that Modi government had deliberately staged the attack to win the 2019 General Elections.  It’s now been revealed that it was India’s military threat—which the ex-IAF chief BS Dhanoa has said the plan to wipe out Pakistan’s forward brigades—which brought Pakistan down to its knees.