Rahul and Priyanka’s ‘burnol’ moment: But can they fight facts? 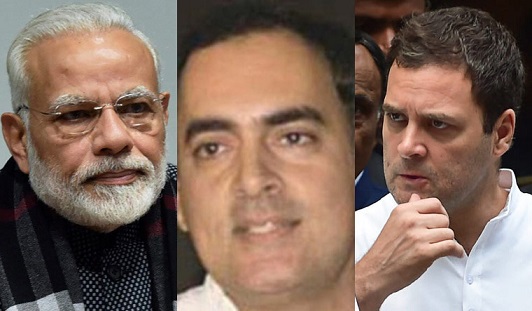 Congress appears suitably stung by Narendra Modi when the Prime Minister implied that former Prime Minister Rajiv Gandhi, was “Brashtachari No. 1” in a rally on Sunday.

Congress president Rahul Gandhi who utters “Chowkidar Chor Hai” jibe at least once a day is stung beyond words by the PM’s charge which are backed by historical facts. To draw a analogy in Hindi: “Sau Sunar Ki To Ek Lohar Ki (What a silversmith does in 100 tries, a hammer-man does in one strike).”

Speaking at rally in Pratapgarh, Uttar Pradesh, Modi said: “Your father was termed as Mr. Clean by his courtiers, and a whole narrative was woven by them projecting him as an honest politician, but his life-span came to an end with a tag of being “Bhrashtachari No 1.”

Congress and the entire gamut of camouflaged opposition, including Samajwadi Party, Bahujan Samaj Party and Trinamool Congress e.g, are falling over each other to sermonize Modi and remind him of his “karma” in consequence, as Rahul Gandhi has done.  His sister did one better: “The Prime Minister, who asks for votes in the name of martyrs yesterday, in his uncontrolled madness, has insulted a virtuous man and his martyrdom. The people of Amethi, for whom Rajiv Gandhi gave up his life, will give him a befitting reply. Yes, Modiji, this country does not forgive deceitful people.”

None of them though have cared to reply to the pointed posers which are emerging from the BJP ranks. For instance finance minister Arun Jaitley tweeted: “Why is Rahul Gandhi so disturbed if integrity issues of the Rajiv Gandhi Government are raised? Why did Ottavio Quattrocchi get kickbacks in Bofors? Who was the ‘Q’ connection? No reply has come.”

Rajiv Gandhi, who accidently came into political horizon after the tragic assassination of his mother and Indian Prime minister Indira Gandhi in 1984, shot into fame with his speech at Boat Club, where he  mumbled “when-a big-tree-falls-earth-shakes” rhetoric in the wake of more than 3000 Sikhs being killed on the streets of Delhi in response to Indira’s assassination.

A record victory, backed by sympathy wave, gave his party 415 seats. Around this time, in late 1984 and early 1985, an image of “Mr Clean” was airbrushed and unleashed on recently introduced color TV. Spotless attire, shawl wrapped over left shoulder and a smile on face was a new profile in Indian politics. The opposition stood dwarfed which included leaders like Chandershekhar, Atal Bihari Vajpayee, Jagjivan Ram etc. but within a span of a year, the weak and erroneous side of Rajiv Gandhi started tumbling out.

Not only stoic silence on the mass killing of Sikhs continued, but his regime ensured that the alleged culprits like HKL Bhagat, Sajjan Kumar, Jagdish Tytler, Kamal Nath etc remained out of justice’s bound.

Akali Dal leader and Union Minister Harsimrat Kaur Badal, supporting Modi, has said, “When Gandhi family is nostalgic about Shri Rajiv Gandhi today, do they also think about the thousands of Sikhs slaughtered under his watch? What do you call a man who gets Sikhs murdered and justifies it to win the elections? Hold on Rahul Gandhi, your Karma awaits you.”

The same year in 1984, Bhopal gas tragedy struck and as per claims by the witnesses, around 16,000 people were suffocated to death, and more than 55000 people were affected with disability. Warren Anderson, CEO of Union Carbide, who was arrested initially, was escorted out of India on a state plane by the Rajiv Gandhi’s government.

“Let them say whether it is not true that Bhopal gas tragedy prime accused Warren Anderson was provided an official plane to come to Delhi and then allowed to flee from India?” Union HRD minister Prakash Javadekar said.

Another havoc Rajiv Gandhi played with natural justice was in 1985 when in an effort to appease Muslim vote bank, he amended the Constitution and sided with the mullahs and maulvis to overturn the Supreme Court judgment in the Shah Bano case where only a paltry sum of Rs 300 was to be given to the divorced woman.

In 1985, Rajiv Gandhi signed Assam Accord but it failed to bring peace in Assam. The rise of ULFA and other groups in North East after the accord resulted in rise in terrorist attacks leading to several deaths and destruction. ULFA was eventually banned in 1990 and a crackdown later brought a relative peace in the region, but that was after Rajiv Gandhi lost his mammoth majority of 1984 spectacularly in next elections.

Similar is the story of Longowal Pact regarding initiation of peace process in Punjab. The signing of pact saw killing of its main signatory, Harchand Singh Longowal a few months later and the whole peace process was derailed, resulting in rise in terrorism and separatism in 1988. The failures of Rajiv Gandhi thus can’t mask the propaganda of Left-Liberal-Sickular combine.

Another foolhardy decision was military intervention in Sri Lanka, which eventually was responsible for his death by suicide bombers. In 1987 Rajiv Gandhi and Sri Lankan President JR Jayawardene signed the Indo-Sri Lanka Peace Accord and Indian soldiers were dispatched to Sri Lanka as part of the Indian Peace Keeping Force (IPKF). Twenty-thousand strong Indian forces landed on the shores of Sri Lanka to take on LTTE. But IPKF suffered heavy losses in 16 day gun-battle, which resulted in 214 soldiers killed, including 2 colonels, and more than 700 wounded. According to Natwar Singh, former external minister in Congress government, “He was badly advised… Rajiv Gandhi sent troops to Sri Lanka without telling the Cabinet,” Singh said in the second part of an exclusive interview to Headlines Today. He continued, “IPKF was not prepared for what they were undertaking in Sri Lanka. There was no coherence in India’s policy. MGR (then Tamil Nadu chief minister MG Ramachandran) had his own Tamil Nadu policy, India had its own policy.”

If the words of Natwar Singh are to be believed, Rajiv Gandhi sent the army to Sri Lanka without Cabinet’s approval for an alien war, yet Congress finds fault at Modi’s surgical strikes and accuses him of treating Army as ‘Modi ki Fauj’.
In an effort to eulogize the deceased leader, Mayawati has forgotten what she once said about Gandhi clan, “Jahan dekho, Nehru aur Indira,” (wherever you look you find Nehru and Indira) and that was still understandable, she said. Then she raised the question: What justified such iconography around Rajiv Gandhi that you couldn’t drive two miles in a city without passing two Rajiv Chowks? He was just an ordinary five-year prime minister who made no mark.”

“Your Karma awaits you,” said Rahul Gandhi. We would know whose does on May 23.