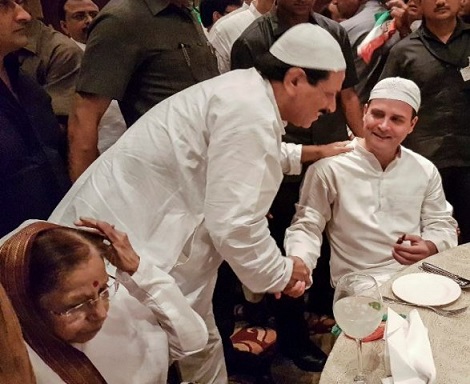 In the aftermath of colossal losses at Lok Sabha elections 2019, the Congress high command has decided to not to host Iftar party this year. Construed by some political observers as a withdrawal of patronage of Muslims, the ‘secular’ Congress is keen not to alienate Hindus completely out of its fold. The lead has been taken by Rahul Gandhi, the beleaguered Congress leader, as it’s announced his party won’t celebrate Iftar party at the national level this year.

The history of hosting political Iftar parties in India began with the advent of Jawaharlal Nehru himself. Nehru used to host Iftar party every year at the Congress Party office, which was at 7 Jantar Mantar Road in those days. The practice was stopped by his successor, Lal Bahadur Shastri. But in 1974, the then Uttar Pradesh chief minister Hemvati Nandan Bahuguna revived the tradition in Lucknow, assiduously courting the Muslim vote bank. Indira Gandhi followed suit.

Iftar is the parlance for breaking of fast after pre-dawn meal of ‘Sehar’ which carries till the setting of sun. It is marking end of Ramzan fast by Muslims and a call to prayer followed by breaking of fast, that is Iftar. Traditionally three dates are eaten to break the fast, in emulation of  Prophet, who broke his fast in this manner, but this is not mandatory.

According to the reports by ANI, the unnamed Congress leaders said that the reasons for this doing away with the practice is due to humiliating electoral losses. Madhya Pradesh chief minister Kamal Nath too has abstained from hosting Iftar Party at his residence. He is the same Kamal Nath who, as per some leaked videos prior to assembly elections in Madhya Pradesh in 2018, asked Muslims to cast their votes en-bloc for Congress and he would safeguard their interests.

Shivraj Singh Chouhan, hosted an iftar party annually at his official residence until last year when his Bharatiya Janata Party (BJP) government was voted out of power. State BJP spokesperson, Hidaytullah Sheikh, said during the BJP’s tenure the size of Iftar gathering went up to 7,000 to 8,000 invitees. “The Congress government is not serious about minorities,’’ he said.

The state units of Congress are hosting iftar parties, Sheila Dikshit hosted one last week but it was a low key affair. In Delhi, chief minister Arvind Kejriwal grabbed the opportunity and an Iftar was hosted by deputy chief minister Manish Sisodia. Mamata Banerjee too is beaming at an Iftar event in Kolkata on Monday.

Bhartiya Janata Party did host an Iftar party when Atal Bihari Vajpayee assumed Prime minister’s office in 1999. However, the Modi government, like in its first term, is not hosting iftar, this year again. However, its’ Bihar unit has hosted Iftar which was not attended by its coalition partner, Nitish Kumar’s Janata Dal (United).

On a lighter note, once at an Iftar party hosted by Somnath Chatterjee during the coalition days of mid-90s, Mulayam Singh Yadav advised Sonia Gandhi to go slow on the hilsa as the bones might stick in her craw, she famously replied, ““Ab main kanton se jujhne ko seekh gayi!” (I have learnt dealing with the thorns).