RJD-Congress cracks are now out in open 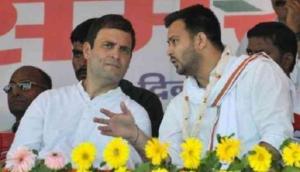 The bonhomie and the cohesion amongst the various constituents of ‘Grand Alliance’in Bihar, including Rashtriya Janata Dal (RJD) and Congress, is soon descending into a free-for-all ugly spectacle.

Shatrughan Sinha, yesteryear’s Bollywood villain turned hero, was contemplating a grand welcome but was in a rude shock when his candidature could not be announced. Congress wants a pie of “Brahmin-dominated” seat in North Bihar but RJD is resisting it. Sinha, who started his political career with a defeat to Rajesh Khanna in 1992 New Delhi by-elections on a BJP ticket, is the incumbent Member of Parliament from Patna Sahib constituency.

The demand for ‘Brahmin-dominated’ seat was not welcomed by the other parties of Grand Alliance, though by Thursday evening, both Congress and RJD claimed that the differences are close to an amicable solution.  It is said that Sinha’s candidature will be announced shortly.

‘Shatru’ met his new-found friend Rahul Gandhi, later in the day and is expected to now formally join Congress on April 6, after the deadlock on seat sharing is resolved.

But the resolving of deadlock seems to be easier said than done. Congress which has been given only 9 Lok Sabha seats out of 40 in Bihar are still being resized by the dominant partner in alliance, RJD.

To get the seats of its preference, Congress is finding itself by resisted by miniscule parties of this Grand Alliance in Bihar. Nishad Vikas Sangh’s leader Mukesh Sahni launched his political front ‘Vikashil Insan Party’ (VIP) and has ‘wrested’ Madhubani constituency which Congress was eyeing. RJD, which has become intermediary in distributing seats amongst various constituents of Grand Alliance, has shown its inability to cancel VIP’s candidature for Madhubani. The demand of Congress for exchange of Madhubani with Valmiki Nagar seat looks a non-starter.

Rashtriya Lok Samta Party(RLSP) may get West Champaran seat which Congress wants. RLSP may also get East Champaran, another seat on Congress wish-list.

Several local leaders have petitioned the Congress high-command against the step-brotherly treatment meted out to them. The State party chief  Madan Mohan Jha termed the seat sharing as one-sided event and blamed that due to the confusion, the grand event of Shatrughan Sinha’s induction in Congress had to be cancelled.

Like Sinha, another BJP disgruntled MP Kirti Azad, who is currently serving his third term from Darbhanga constituency, is sailing in the same boat. RJD is contemplating this seat for its Muslim candidate Abdul Bari Siddiqui, notwithstanding Azad’s winning track record at Darbhanga.

Congress has been downsized from 11 to 9 seats and the seats they have eyed—Darbhanga, Madhubani and West Champaran—are still elusive.

The resentment in Congress is brewing up with the reports that RJD may distribute tickets to others like Tariq Anwar of NCP.  The scene may become more confusing and the Grand alliance may look like a patch-work of parties of selfish motives,

Another bone of contention is accommodation of Rajesh Ranjan’s Jan Adhikar Party (JAP). Rajesh Ranjan, popularly known as Pappu Yadav,  after his understanding with Congress, has given ticket to his wife Ranjeet Ranjan from  Supaul which RJD wants. Rajesh Ranjan is fighting from Madhepura seat, much to the chagrin of RJD bosses who want that seat vacated for JD(U) President Sharad Yadav, who lost to Rajesh Ranjan in 2014 elections. “If Pappu does not withdraw from Madhepura, we will field our candidate against his wife at Supaul,” unconfirmed reports from RJD quarters say.

To add to the cacophony within Grand Alliance, Lallu Yadav’s son and chief of RJD’s Chhatra Sangh, Tej Pratap Yadav has shown his displeasure over rejection of his two recommendations and resigned from the post of Student wing.