Rohit’s mess could be of his own making: The hope is fading by the minute 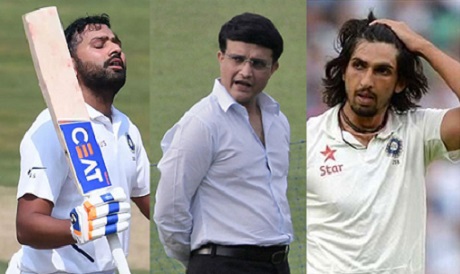 The Board of Control for Cricket in India has announced that neither batsman Rohit Sharma nor paceman Ishant Sharma will be available for the first two Test matches in Australia. About time Rohit reflected upon how things came to such a pass, especially since the five wise men of the BCCI selection kept making changes to the Indian squad till they boarded the chartered flight to Sydney.

Rohit seems to have been irked by several issues and least of them happen to be anything to his personal fitness or form. A shoo-in in both the 50- and 20-over formats, the opener was not picked in either squad due to his hamstring injury that forced him to miss several games in the Indian Premier League 2020 for his title-winning Mumbai franchise.

But no sooner were the Team India squads announced, Rohit was back on the field as if to cock-a-snook at the selection committee and its explanation for not considering the Mumbai batsman for the tour Down Under.

The move does not seem to have gone down well with the powers-that-be since last minute chopping and changing was done to all three squads, Rohit’s name only figured in the Test outfit where his place in the final playing eleven can be at best be said to be tenuous.

On the flip side was the case of Bengal wicket-keeper Wriddhiman Saha, who sat out several key game for his Hyderabad franchise due to a severe groin strain but still found himself boarding the plane for Australia.

There was always the back-up glove-man in Rishabh Pant, who incidentally must sit out the limited overs games but Sanju Samson was added as reserve keeper for the 20-over internationals as cover for vice-captain K L Rahul.

There is definitely more than meets the eye and rumblings of dissent are clear as Team India kick-off the action with the one-day internationals.

Further fuel was added to the fire by skipper Virat Kohli’s decision to return home after the Adelaide for the birth of his first child. With Ajinkya Rahane has already been named vice-captain for the Test series but there need to be a deputy to him as well once he steps to take full charge, of which now there remains little doubt.

Rohit was reportedly offered the sop but he is said to have turned it down, not willing to play second fiddle to Rahane.

The team management’s suggestion to retain Shreyas Iyer could prove to be a further blow to Rohit chances of playing the last two Tests since his fortnight-long mandatory quarantine plus acclimatisation needs to be factored in before he can be available for national duty.

Even though BCCI has requested for relaxation in quarantine rules for Rohit Sharma and Ishant Sharma, it’s unlikely to cut much ice with their Australian counterparts. After all, a similar request by tennis players for relaxation at the scheduled start of the 2021’s first Grand Slam event was flatly turned down by the Victorian health authorities.

Yes, Indian team had to quarantine itself for only three days in Australia but that was because they were already in a bio-bubble in the United Arab Emirates (UAE) for IPL. Further, they flew in a chartered flight. The two Sharmas in contrast have stepped out of the bio-bubble and their flight to Australia would be a commercial one.

A sobering thought for Rohit and Ishant Sharma and their considerable fans, not to speak of the dent it would do to India’s chances Down Under.