Sharif senses his moment against Imran Khan; Saudis only too keen to help 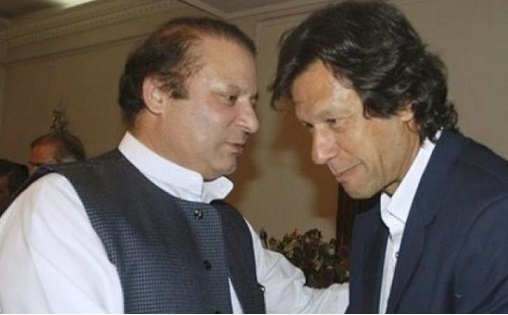 As the wheel of political events in Pakistan turn at a stupendous velocity, former Prime Minister Nawaz Sharif had been charged with sedition charges.  Sharif, who is based in London at the moment for his medical treatment, is perceived as a threat to the ‘selected Prime Minster’ Imran Khan, backed by Pakistani Army.

Nawaz Sharif, who has been elected thrice but was never allowed to complete any of his terms, has now upped his ante and decided to take the all powerful Pakistani army.

“Today, our struggle is against those who installed Imran Khan and who manipulated elections to bring an incapable man like him into power and thus, destroyed the country,” said Sharif, in his address to the opposition conference via a video link from London.

He continued, “It is saddening that the situation has escalated to a state above the state. This parallel government illness is the root-cause of our problems.”

Nawaz Sharif has reasons for his anguish.. After Kargil misadventure in 1999, General Musharraf toppled his democratically elected government and arrested him on charges of attempted murder, terrorism, corruption and tax evasion. Had it not been Sharif’s liaisons with Saudi Royal family and King Fahd, where he stayed in exile, he would have been executed.

In 2018 also, the history repeated and he was charged with corruption by National Accountability Bureau on Panama Papers case.

But all that, it seems, is left behind. At 70, Sharif looks to be most determined ever and ready to take on the Prime Minister and his backers in garb of army and ISI.

Sitting in s distant scaffolding, he shot his arrows well, He came to Pakistan to get arrested, along with his daughter Maryam earlier. Leaving her behind, he slipped to London for medical treatment. This way, he positioned his successor at the pulpit where he left and gathered public sympathy despite the charges levied on him as he dodged the system.

The acumen of Sharif’s political mind can further be gauged by the fact that he is instrumental in uniting opposition parties against Imran Khan’s backers – The Pakistani Army. He proposed the name of Islamist leader Fazal ur Rahman to head constituted opposition conglomerate ‘Pakistan Democratic Movement’.

Pakistan Democratic Movement (PDM), an alliance of opposition parties, is planning a series of rallies and protests beginning this month aimed at toppling Khan’s government.

Fazal ur Rahman is a known Islamist  hardliner and President of Jamaat-e-Ulema-e-Islam and an opponent of Imran Khan. In him, Sharif has found a perfect foil to ISI as far as  the  ideological proximity with Islamist fundamentalists is concerned.

The jittered Pakistan Tehreek-i-Insaaf’s (PTI) exasperation is evident as the charges and accusations again Sharif look hollow. “Nawaz Sharif, a convicted person, is maligning institutions and provoking the masses to rebel against the army and the government through his speeches from London,” states the police report.

Also, the authorities accuse Sharif of conspiring against the country, attempting to denigrate Pakistan as a “rogue state.”

In an interview with a local TV channel, PM Khan accused Sharif maligning the military generals at the behest of Pakistan’s rival India.

It is also murmured in some Politico-military circles in Pakistan, albeit in hushed tones, that Saudis can be behind this move of Sharif. Pakistan is the only nuclear Islamic country and Imran Khan’s team has threatened the Saud Royal family of leaving their camp a few months back. The Saudi government did not expect this audacity. Nawaz Sharif, who is obligated to the Kingdom, is the perfect replacement of Imran Khan.