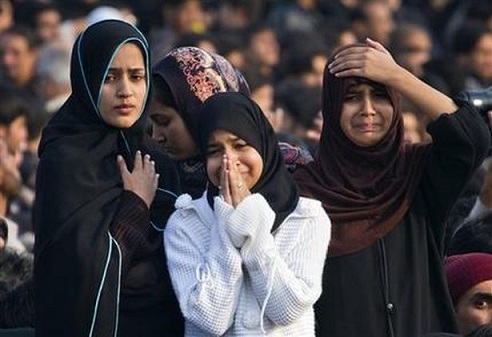 In recent times, massive rallies of up to 30,000 protestors have targeted Shias in Pakistan; on Karachi’s major highways, MA Jinnah and Saeed Manzil road; chanting anti-Shia slogans, declaring the community as Kafirs.

Pakistan may be the only state in the world that fragments its own society. Since the year it came into being, not only the religious minorities like Hindus, Christians and Buddhas were at the receiving end of radicalised society, but the various Muslim sects were systematically targeted too.

Shias, like Mohajirs and Ahmediyaas, are subjected to religious hatred and bigotry. Around 80 percent of Pakistan is Sunni Muslim. There have been violent and aggressive demonstration in Pakistan against Shias where ‘Shia Kafir’ slogans are being shouted.

Having not learnt lessons of East Pakistan where Bengali Muslims were subjected to the socio – political apartheid by Pakistani-Punjabi chauvinism, and it lead to breaking away of the land into Bangladesh, the majority violent adventurism continues.

Pakistan has the second largest population of Shia Muslims outside Iran, where they account for an estimated 15 to 20 per cent of the population.

Leading names were part of this anti-Shia protests. It included Muneeb-ur-Rehman which decrees the moon-sighting for the Islamic calendar on behalf of the government-affiliated Ruet-e-Hilal Committee. There was Abid Mubara, the Karachi head of the Tehrik-e-Labbaik Pakistan (TLP) who said Sunnis would not hesitate to behead those who blasphemed.

Relations between Pakistani Shia and the bigger Sunni community were largely harmonious but it began to change under the military dictator General Muhammad Zia-ul-Haq. Pakistan wanted to snuggle closer to Saudi Arabia and a Shia theocracy in Iran had ascended after the Islamic Revolution in 1978-79 and that was that.

It is alleged by the Shias that not only the government has failed to provide security for them, but has also, in effect, colluded with the perpetrators through the free space afforded to supposedly outlawed groups who continue to evade prosecution.

While the apostatizing slogans of Sipah-e- Sahaba  (SSP), a proscribed terror group, declared that has the genocide of Shia as its declared manifesto, it’s also demanding the expansion of the already murderous blasphemy law which would allow Shias to be persecuted.

In July, the Punjab Assembly passed the Tahaffuz-e-Bunyad-e-Islam (Protection of Foundation of Islam) Bill, which upheld the Sunni interpretation as the only acceptable version of Islam in Pakistan.

The Shias in midst of official inference to their security concerns, are starting to look the other way.

The Shias of Pakistan may find that they have little choice but to turn to Iran’s powerful Islamic Revolutionary Guard Corps (IRGC).

It is no secret that Corps have given training to the likes of Lebanon’s Hezbollah and the Popular Mobilisation Forces in Iraq, both of which emerged either due to the marginalisation of the Shia or the incompetence of the state in protecting them.

The IRGC trained  Zainebiyoun brigade, an army consisting of Pakistani Shias fighting for government forces in Syria, may be compelled to shift the focus from Syria back to Pakistan, although the faction is still in its early years of development.

“You blaspheme, you must Die !”,  Clause 295-C of Pakistan Court reads, “Whoever by words, either spoken or written or by visible representation or by any imputation, innuendo or insinuation, directly or indirectly, drums the sacred name of Holy Prophet  Muhammad shall be punished by death or imprisonment for life and shall also be liable to fine.“

The blasphemy law was first introduced in 1860 during British rule and the condition of life imprisonment was made defunct by Federal Shariat court in 1990.

The Ahmaddiyas were first to taste the Blasphemy law in 1974 after anti-Ahmaddiya riots erupted.  Every one has the licence to kill anyone publicly in the name of blasphemy and there was no need to court trials. An assailant can be termed as Ghazi or Hero of the nation.

But Islamic scholars differ on the very definition of blasphemy. While one verse from Holy Quran directly mentions blasphemy (sabb) is 6:108.[5] calls on Muslims not to blaspheme against deities of other religions, lest people of that religion retaliate by blespheming against Allah. “and do not insult (wa la tasubbu) those they invoke other than Allah…Thus we have made pleasing to every community their deeds. Then to their Lord is their return, and He will inform them about what they used to do. ” [Quran 6:108].

An another verse from Holy Quran; “The only punishment of those who agree war against Allah and His messenger and strive to make mischief in the land is that they should be murder or crucified or their hands and feet should be cut off on oppose sides…Except those who repent before you over – power them, so know that Allah is Forgiving, Merciful “. [Quran 5:33-34].