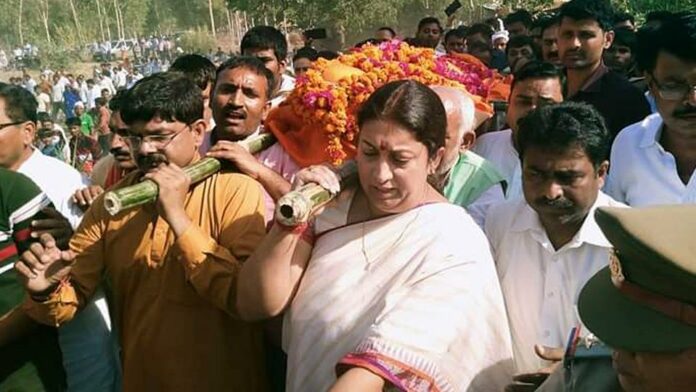 Breaking the age-old traditions of religious norms, Smriti Irani carried the mortal remains of her trusted lieutenant Surendra Singh, who was shot dead by her political adversaries in Amethi on Sunday.

Not only did she assuage the pain of the grieving family by her humane touch, she delivered a new sobriquet to women empowerment by becoming pallbearer of the deceased.

Surendra Singh, the former village Pradhan was shot dead point blank in the courtyard of his home, where he was sleeping after celebrating Irani’s victory over Rahul Gandhi, the biggest upset of the 2019 General Elections. It’s being speculated that the murder is a fallout of the stunning outcome of the bitterly contested Amethi. The deceased’s son Abhay Pratap Singh said that his father was shot at head. He was initially rushed around locally before being driven to Rae Bareilly where he was referred to a trauma centre in Lucknow. He was declared brought dead.

Irani, who was in Delhi, flew down to Amethi, cutting own her celebrations, and lending a shoulder in her trusted lieutenant’s final journey.  She carried the mortal remains of the deceased on her shoulders for about a kilometer, something the women have been barred from doing for centuries.

Where the tradition and superstition dictates non-participation of women in the funeral procession in orthodox Hinduism, Irani has, by her participation, has tried to deliver a new definition on liberal, progressive and inclusive Hinduism. Bhartiya Janata Party has always been accused for promoting religious bigotry by its adversaries, Irani has, by becoming a pallbearer, has smashed the traditions and exhibited the revered ‘Naari-Shakti’.

Surendra Singh actively participated in Irani’s campaign from the front and had earned praise from the BJP leader in her speeches at public meetings. The efforts of Irani in apprehending the culprits and delivering justice to the traumatized family are bearing fruits. Police has given protection to the family and have already detained a few. Said Irani, “We will catch the killers even if they are hidden in ‘Pataal (underground)’ –and would move Supreme Court to ensure they get the death sentence.”

As per the latest information, three suspects namely Wasim, Dharmnath Gupta and Ramchandra have been arrested, Two others Naseem and Golu are being interrogated.

The 17th Lok Sabha has highest women representation ever with 78 Member of Parliament, the women in parliament must inchoate a new revolution of equality and be a beacon of hope for millions of women. A religion must be relevant to present times and Smriti Irani has just taken an important step in this direction.