Stubble-burning: Why it’s an issue which has defied solution? 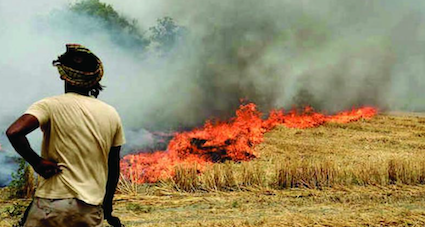 Why everyone is so helpless on stubble-burning which engulfs Delhi with its murderous air every winter?

I have chosen the word murderous with some responsibility as nearly 18 percent of India’s 20 lakh deaths every year are attributed to poisonous air.

And don’t you buy the argument of slicks that stubble-burning has a minor role—on November 7, its share was 48%. Just two days back, there was throaty cheers that it had been reduced to 35%.

Stubbles happen because crops migrate from rice to wheat in Punjab, Haryana and Uttar Pradesh and the window available between the two is of only a fortnight.

Farmers have no time to lose and they end up burning the paddy stubble. All alternatives only look good on paper but come winter and there is still that burning eyes and smoke-filled lungs.

Centre thought of subsidizing upto 80 per cent of the machines (see image below) which not only spread seeds but also bury the stubble within the soil. In Punjab alone, there are 75,000 such tractors on the last count. But the trouble is the rising cost of diesel still pinches the farmers around Rs 7,000 per acre of land. And machine manufacturers, those sharks, as if on cue, raised the price to Rs 2.40 lakhs from the one of Rs 1.80 lakhs a year ago—for raised government subsidies mean more profit!

Stubble of course could be converted into energy but presently only a million tonnes of paddy straw—a mere 6% of total —is converted into 100MW of power when it needs 1000MW to eliminate the knotty issue. The Discoms too would’ve to shell extra because its Green Power. Besides, the bio-fuel power plants are few in numbers and could only multiply if the government promises to purchase the entire generated Power.

How about replacing paddy with other crops such as oilseeds and pulses? The bio-diversity could ensure that the soil remains fresh, the aquifers are not depleted which are run dry by the water-intensive paddy crop. But again, the theory crashes in the face of hard reality. Farmers are assured of paddy purchase by the government which isn’t the case with other crops.

How about advancing the harvest of paddy (rice) so that there is enough time for stubble to be transported for environmental-friendly disposal? Again, the crops could only be sowed once a State government, such as Punjab, notifies the date in May or June. The authorities do so to time it with monsoon so as the aquifers are not overstrained. Thereafter there is a rush for sowing and harvesting gets tricky when the monsoon overstays as has been the case this winter. Then comes the dreaded cold season, the stubble are set alight and the changed wind direction of November carries the smoke to Delhi-NCR. As per the Mint, between September and November, Punjab and Haryana witnessed 67,000 instances of open fires.

Then the wiseheads thought of bio-decomposer. It looked good only till it was realized that it takes upwards of a month to do the job.

It’s not as if stubble-burning is a recent phenomenon. It’s been there for decades. But while it were labourers earlier for harvest, now there are giant machines which do the job quickly. On the flip side though, they leave foot-long paddy stubble on the farm. Farmers either transport it and shell Rs 50,000-60,000 or show the match-stick to it. The option chosen is no-brainer.

So are citizens condemned to breathe the toxic air in the Capital at the onset of winter? Is there no light out of this haze of smog and smoke?

Since money is at the heart of the problem, the governments must seriously consider incentivizing other crops than wheat to the farmers. The other two options—offering cash to farmers or subsidizing the cost of transporting the stubble—is way beyond the pockets of governments. But a long-term view has to embrace the concept of biofuel plants, the purchase of Power it produces and the cost Discoms would be left to bear.

In essence, don’t pay much attention to parleys between Centre and Delhi government today, and the crease on the foreheads of our Honourables in the Supreme Court. It’s all shell, no substance. It’s playing to the gallery which are us condemned citizens. There is no end in sight. And winters are gonna be long and poisonous as they always are.