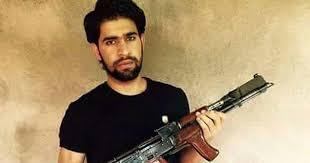 A latest video of Abdul Rashid Bhat, father of the slain Al Qaeda terrorist Zakir Musa has surfaced on the social media, where he is seen, in a most rabid manner, indoctrinating young boys to pick up guns to establish ‘Islamic Caliphate’ and fight against India, as his son did. He is heard saying that whoever leaves home to be a mujahid is dear to Allah.

Bhat, who retired as Assistant Executive Engineer from ‘Public Health and Engineering Department’ is drawing a hefty monthly pension of around Rupees 48,000, besides the retirement benefits, gratuity, commutation etc to the tune of Rupees 50 lakhs approximately.

In a tweet posted by former Major Gaurav Arya, containing the objectionable video of Bhat where he is seen saying, “Please be united, don’t get divided. Enemy is always looking for an opportunity to divide us. Already they are successful in doing so. Now they will create wedges between different  outfits. All Mujahids are our darling, all those fighting for Allah are equal. It hardly matters which outfit or Mujahid you are, how much educated you are, which sect you are from, all of us are equal. Please be united.”

The video has created a furore in Indian social media. The fact that Bhat is still drawing pension from the state’s coffers is deplorable. Here is a man who fattens himself on nation’s money and wants to destroy the very same nation. In a way, those funds are being used to further the cause of terrorists and mujahideens.

Take the case of separatist Syed Ali Shah Geelani who served as the chairman of Hurriyat Conference. He is the same Geelani who condemned the killing of Osama bin Laden and held his last rites in absentia in Kashmir. He supported attack on Indian Parliament in 2001 and Afzal Guru. He had the gumption to declare openly that he is “not an Indin.” He once said that travelling on Indian passport was a “compulsion for every Kashmiri.”He once told a large gather that “We are Pakistani, Pakistan is ours.” His grandson, Anees-ul-Islam has been afforded a senior job Jammu & Kashmir’s tourism department. Geelani’s aid, Ghulam Nabi Sumji draws pension from J & K government.

All this benefits to terrorists and their kin have come under the rule of either National Conference (NC) or People’s Democratic Party (PDP) in the Valley. It begs the question whether the state governments have the interest of Pakistan or India in mind. Whether they are furthering the cause of integrity of India or its’ break-up.

That’s where the question of continuation of Article 370 comes into mind. Isn’t it a cover, in the name of autonomy, for J & K governments to encourage separatism and terrorism?

Ashok Pandit, film maker and a prominent voice in Kashmir affairs, raised concerns during a television debate, on the issue, “A major façade in the name of Article 370 is going on in J&K. There is nothing political about the Kashmir problem but a communal problem. For the last 30 years there has been ‘Wahabisation’ and ‘ghettosiation’ in Kashmir. The ethnic cleansing of Kashmiri pandits is there for all to see.”

Commented Major General (Retd) GD Bakshi, a war veteran and expert on sstrategist on politico-strategist affairs, “Indian electorate has responded in 2019 to the Pakistan’s proxy-war by voting for Modi en-masse.  After Balakote strikes, we have made clear statement on Pakistan’s terror exports and will deal sternly.”

The bigger question is: With a wafer thin lead in assembly elections is enough to proclaim that Kashmir Valley parties actually represent the state of J & K? And if not, how could they further the terrorists agenda on Centre and tax-payers’ money?