The faÃ§ade of restoring Art. 370 masks the Business of Opium: Bravo, Kashmiri dynasts 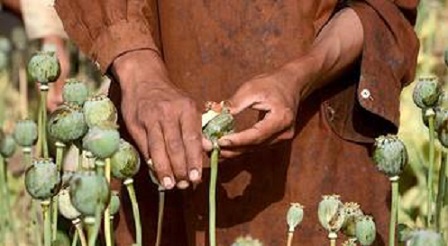 (Far too many men have died “protecting” Kashmir, from where the primary crop was not apples or saffron. Many were from my friends and family. This article is in their honour.)

Please read this before proceeding further, and if you find yourself within, as friend or family, then think again about PMLA (Prevention of Money Laundering Act). The day and age when financial crime in India abated with the death of the perp are well and truly over – as people are discovering every day. The latest being Peter Kerkar, amongst others, and possibly the scion of a huge personal security firm known more for being the bagman of a much in the news lately city-based political party that levied its own tolls on airports and seaports in the city it was powerful in.

Which then takes me to narcotics in and from Kashmir.

The biggest change that the abolition of Article 370 has brought about is that the State Border for Kashmir now ends before the roads from Kashmir enter the plains and diverge in multiple directions. The control and checking, thus, now lies with Jammu. In the other direction lie mountains, again with the roads under control of Ladakh and HP, cutting off any movement towards PoK or Tibet too. The physical movement of narcotics from Kashmir is effectively now bottled up. Look at a map – how many roads exit “New” Kashmir to Jammu?

But nobody will write about this. And most if not all who matter, or write, fly to Srinagar. To the best of my knowledge, only one mainstream author has ever written about the reality of physical movement of poppy cultivation in Kashmir, and he has had to pretty much change his identity and fade away after having moved around under huge police protection for years. But poppy is a huge wealth generator for a select few, protected until a year ago by 370, all of which has now changed.

The physical movement of opium, derived from poppy, is also an interesting subject. But for now, it is the movement of the wealth generated, which is of interest, After all, if the number is so high that it cannot even be estimated in how many 1000s of crores, then how does the money flow?

Opium, as mentioned before, has to move physically. Value add is done en route. The real profit is in value add. The price for a kilo of opium, in sap or hard solid form, sold ex-field is less than what is paid for a gram of heroin on the streets a few 1000 miles away. Like with tea, even the husk and the dust or powder has a value, and is what is ruining complete generations along the route. Even the gunny sacks in which narcotics are carried have a value, and for multiple reasons, not just the dust that emerges on washing them.

All this is operational.

The real games are –

b) laundering the proceeds so that they become white somehow

The 3rd game is the big elephant in the room in India – which is to run a complete aspirational industry towards making the consumption of designer drugs a domestic business. Along the lines of what was done to China till a century ago. Look carefully at the electronic media perpetuating this terrible addiction. The sellers are usually from one particular minority community and the consumers from the other communities. And this is now a new “Game”. Fortunes were made and stand out as examples.

Thus from a Kashmir’s field to a seaport, say in Gujarat, is essential which is where and why the Truth could set us free.

After all, the Frontier Mail from Peshawar to Bombay with its cargo, rolled through Gujarat.

Things have changed in India. Children of politicians or any other people of public prominence who did the loot-and-scoot routine in India are now not getting away just because they peeled off to abroad. Financial crime extraditions are increasingly simpler, or tiresome, for the perps.

Truth be told, the concept that all crimes, especially “civil” crimes like fiduciary, were forgotten, forgiven and abated with the death of the perp, is no longer true in India. Your crime is not restricted to your financial crimes. The Prevention of Money Laundering Act (PMLA)—now in force in new Kashmir as in rest of India—is hugely troublesome to dynasties build on wanton loot.

Whoever directly or indirectly assists is a party in the proceeds of crime including its concealment, possession, acquisition or use and shall be guilty of offence of money-laundering

in any manner whatsoever;

And therefore this is repeated:

So the New India has a few biggies, directly or through connections including the marriage route, worried. In Kashmir Valley or on shores facing Arabian Sea on our western face. After all, India’s opium seizure in 2018 was the fourth highest in the word.

And this has got the biggies, directly or through alliances such as marriage, worried. In Kashmir Valley and in states facing the Arabian Sea. It has all to do with the Laws of New India, especially, pertaining to narcotics, being implemented strictly.  All this while they consumed the delicacies and left the humbug of saving Article 370 and 35A for us.