The man who spells terror in Birbhum: 8th and final phase of Bengal polls 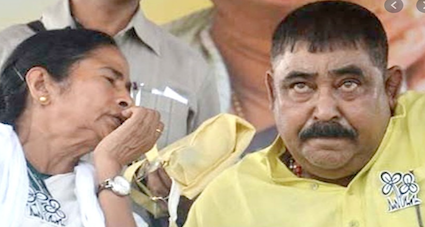 It was April 15 when the world heard the chilling words of Anubrata “Keshto” Mondal, Trinamool Congress’ district president in Birbhum. The man, whom Bengal chief minister Mamata Banerjee calls her dear “brother”, flaunted himself in front of cameras and allegedly said there would be murders this year too as there were in 2014, 2016 and 2019 polls.

Thirty-five seats would go for polls in what would be the eighth and final phase of Bengal assembly polls on Thursday but more than remaining seats of Malda, Murshidabad or Kolkata, it would be 11 seats of Birbhum which observers, not to say Election Commission and Central Armed Police Force (CAPF), would watch with bated breath.

This is Mondal’s lair. Police is openly threatened, and so is administration. Reckless murders and bombings are commonplace. Bomb-making has acquired the trapping of a mini industry. The Visva Bharati University, one of Rabindranath Tagore’s abiding memory, today is home for various criminal activities. People from Murshidabad and Malda drop in to capture land in Birbhum. All are allegedly attributed to Mondal. This year too bombs were hurled in election campaign of Sainthia AC’s BJP candidate, Priya Saha.

Election Commission has put Mondal under strict surveillance of the executive magistrate and the CAPF, beginning 5 p.m (April 27) and 7 am (April 30). Nagendra Nath Tripathi, deputed to supervise April 1 poll in Nandigram, has now been take over Birbhum as superintendent of police. Tripathi caught eye when Mamata Banerjee had stationed herself in booth no. 7 in Nandigram on polling day on April 1, alleging voters were not able to cast votes. It was Tripathi who looked into her eyes and assured her a fair poll. People haven’t stopped liking Tripathi since then.

Tomorrow, Birbhum has an opportunity to free itself from goondacracy. In 2019 Lok Sabha polls, BJP gained significant vote share from Dubrajpur, Suri and Rampurhat assemblies. In Sainthia and Mayureswar too it led, albeit by a slender margin. The rest of the seats—Bolpur, Nanoor, Labhpur, Hansan, Nalhati and Murari—went to Trinamool Congress. BJP could hope for five out of nine assembly seats in Birbhum.

In Malda, BJP is eyeing three seats—Manikchak, Malda and Baishnabnagar—all on or near the border. This confidence stems from their impressive showing in the 2019 Lok Sabha polls. All three had belonged to Trinamool Congress or Congress in the 2016 assembly polls. There is a buzz that Congress and Trinamool could be in a clandestine arrangement here. However, it won’t bear any fruits on the ground since Malda trust Congress more than Trinamool. That improves BJP’s prospects. The rest three seats—Englishbazar, Mothabari and Sujapur—are Congress seats.

In the remaining 11 assemblies of Murshidabad, BjP could hope for Khargram and Burwan since they are SC seats but traditionally, these seats have voted for Congress. A fair bit of this support shifted towards Trinamool Congress in the 2019 Lok Sabha polls.

There is an overhanging sense of fear here since quite a few Al-Qaeda terrorists have been picked up lately, as have been cattle smuggling king pin Enamel Haque. Hindus have consolidated in favour of BJP even though they are a minority in Murshidabad. As said in previous column, prime minister Narendra Modi addressing Congress state president Adhir Ranjan Chowdhury as “Adhir Da” has got tongues wagging.

Amongst 7 assemblies of Kolkata, Jorashanko, Shyampukur & Maniktala may go in favour of BJP while the rest would remain with Trinamool Congress.

In the last lap, while the maximum number of seats for BJP shouldn’t be predicted, the Saffron Party may expect a minimum of 11 seats while discounting Murshidabad which could spring a pleasant surprise to them.