The truth of Haldighati: A stalemate which we read as Rana Pratap beaten 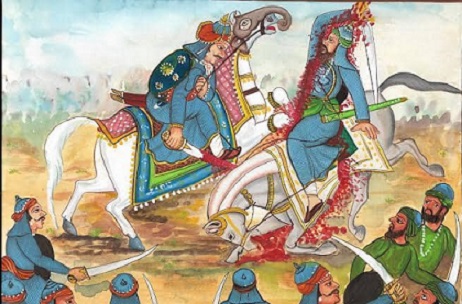 (The author, passionate on India undiscovered, presents his second piece on Haldighati, the venue of Maharana Pratap’s valour below. The first could be read here).

While there are many legends around The Battle of Haldighati, we will touch upon one of the most fearsome episodes today of that four-hour long bloody battle which created a pool of blood and is the known by the legend of Rakht Talai (blood-pond).

Though our historians claim that Maharana Pratap was defeated, there are credible contemporary sources which feel Haldighati ended in a stalemate. The common sense tells us that if Maharana Pratap had really been defeated, Haldighati wouldn’t have remained in our consciousness. If he indeed was, he wouldn’t have won back 56 forts within the next one decade from the Mughals.

Mughals were led by commander Behlol Khan Pathan, who legend has it stood 7ft 8in in socks, weighed 150kg, master swordsman, undefeated, a savage who would behead three-year-olds and civilians and was barbaric of the Taimurlang kind. Akbar used to gift him sex-slaves for his harem. The best of sturdy Arabic horses used to look a puppet in his hands.

Emperor Akbar fearful of the Rana, gave marching orders to Behlol Khan, alongwith Raja Man Singh, to get him the Rana’s head from Mewar in 1576 AD. A huge army was dispatched for capturing the Rana, a force of 80,000 strong Mughals assisted by the Rajputs under Raja Man Singh.

Maharana had set his eyes on Raja Man Singh from the start. He set upon him, astride his famous horse Chetak but in the nick of time, Behlol came like a formidable wall between the two. The swarming Mughal army too surrounded Rana. But the heroic Rajput warrior, eyes inflamed, was unstoppable. He confronted Behlol and with one strike of his sword, cut through his head through his helmet into two pieces (see main illustration). Behlol Khan’s fall set Mughal army into a flight. The place where all this took place in Haldighati is called Rakht Talai. There are many old artworks which depict this scene; many bards and poets who have immortalized it. It’s a part of folklore and dance dramas in Mewar and Rajasthan.

(The author at Haldighati and Rakht Talai )

Maharana’s battle gear, weighing 235kg, is today preserved in Udaipur palace. The bhala (spear) alone weighs 35kg. Such was the vim and vitality and valour of Rana.

One interesting fact that I stumbled upon is the 500-year-old rivalry that arose from Haldighati amongst the Rajputs. The Mewari Rajputs from 1576 onward started considering the Rajputs of Jaipur & surrounding areas as traitors since they colluded with Mughal emperor Akbar & continued to do so even after Akbar’s death. Till today a Mewari Rajput will never give his daughters hand to someone from Jaipur or even have a meal at their place, so is the legend. Astounding.